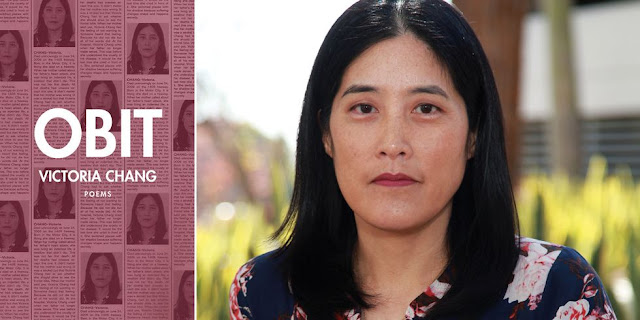 Language—died again on August3, 2015 at 7:09 a.m. I heard aboutmy mother’s difficult nights. I hireda night person. By the time I gotthere, she was always gone. Thenight person had a name but was likea ghost who left letters on a shorethat when brought home becameshells. Couldn’t breathe, 2:33 a.m.Screaming, 3:30 a.m. Calm, 4:24a.m. I got on all fours, tried to pick upthe letters like a child at an egg huntwithout a basket. But for every letterI picked up, another fell down, as ifprotesting the oversimplification ofmy mother’s dying. I wanted the nightperson to write in a language I couldunderstand. Breathing unfolding,2:33. Breathing in blades, 3:30.Breathing like an evening gown,4:24. But maybe I am wrong, howdeath is simply death, each slightlydifferent from the next but the finalstrike all the same. How the skinresponds to a wedding dress in thesame way it responds to rain.

Labels: Copper Canyon Press, poetry, Victoria Chang
Newer Posts Older Posts Home
Subscribe to: Posts (Atom)
A poem (or more) will be offered by the hour or with the day and at the very least once a week. So stay on your webbed toes. The aim is to share good hearty-to-eat poetry. This is a birdhouse size file from the larger Longhouse which has been publishing from backwoods Vermont since 1971 books, hundreds of foldout booklets, postcards, sheafs, CD, landscape art, street readings, web publication, and notes left for the milkman. Established by Bob & Susan Arnold for your pleasure.
The poems, essays, films & photographs on this site are copyrighted and may not be reproduced without the author's go-ahead.
Write Bob or the Bookshop