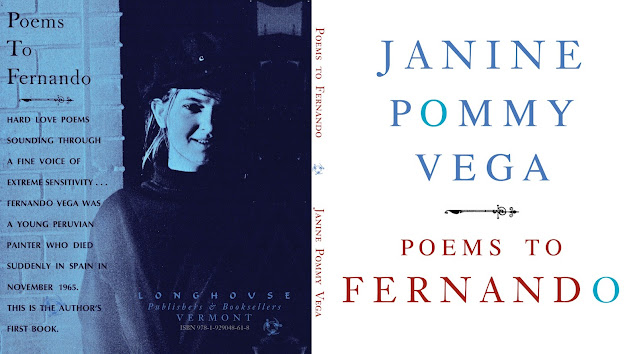 Janine Pommy Vega (1942-2010) was born February 5 in Jersey City and grew up in Union City, N.J., the middle sibling of three. She graduated from high school as class valedictorian in 1960 and had already become intimate with major players in the Beat Generation. Gregory Corso became her liaison to life-long-friends Allen Ginsberg and Peter Orlovsky, who became her lover. She remembers as a teenager meeting Jack Kerouac asleep under a table. Her life as a poet, teacher and traveler was forever a spiritual quest for transcendence which originally took her on the road at age sixteen to New York’s Lower East Side, later a marriage and early widowhood to the Peruvian painter Fernando Vega, who died of a heroin overdose in Ibiza, Spain in 1965. Her first book of poems Poems to Fernando was one of the earliest Pocket Poets (#22) by a woman author published by City Lights Books in 1968. Her posthumous book Janina would document this restless time period for the poet between Europe, the Middle East and America. By the early 1970s Janine would spend two years as a hermit on the Isla del Sol on Lake Titicaca in Bolivia. Her prose book Tracking the Serpent has been described as a feminist “On the Road” journeying with the poet on her visits in the 1980s to matriarchal worship sites in Ireland, England, France, Nepal and the Amazon. She trained herself to become a skilled hiker throughout the Catskill Mountains which was her primary dwelling for the last forty years of her life. A devoted teacher and activist for the rights of prisoners and children, Janine made her name and legend in the New York prisons and school system. The last ten years of her life were tough, a struggle with many medical maladies, but the poet persisted, reading her poetry to the public, often with music, wherever invited. Janine Pommy Vega died of a heart attack at her home in Willow, New York on December 23, 2010.

Please use our email address of

Labels: Beat Generation, Janine Pommy Vega, Longhouse Books, poetry
Newer Posts Older Posts Home
Subscribe to: Posts (Atom)
A poem (or more) will be offered by the hour or with the day and at the very least once a week. So stay on your webbed toes. The aim is to share good hearty-to-eat poetry. This is a birdhouse size file from the larger Longhouse which has been publishing from backwoods Vermont since 1971 books, hundreds of foldout booklets, postcards, sheafs, CD, landscape art, street readings, web publication, and notes left for the milkman. Established by Bob & Susan Arnold for your pleasure.
The poems, essays, films & photographs on this site are copyrighted and may not be reproduced without the author's go-ahead.
Write Bob or the Bookshop