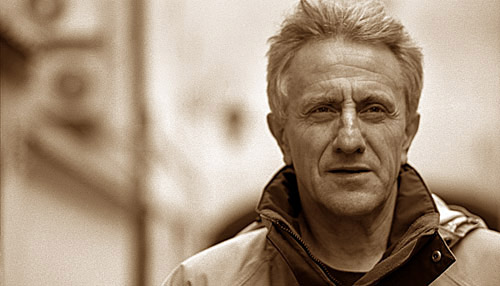 Thank you, I managed to get a seat
on the right side, on the side of the river
which attracts the overflowing shoreline.
With the sign Riverside and overgrown
rocks, the red-brick building.
With the sign Yonkers which turns
gently to the left, then disappears.
Thank you, I can watch. With the bridge
which we have laid from here
to the other shore, in the vicinity of Tarrytown,
with its almost imperceptible embankment.
And yet, the river sometimes appears
at the tracks, as a reminder,
and the steep hills on the other side,
unmoving, nod, the light alone
moved by their fate. And by
the river's? — take your eye off it
for a second — it gets away
at Croton-Harmon, under track three
at platform two.
If on the other side
I'd watch the houses, roads, the trees
stripped of their leaves, but shining
with this delayed December light, because
it's January now — here and there shadows
adhere on the trunks. On the rocks at Poughkeepsie
I could study the icicles because the sun
hadn't broken all the ice yet
and January is snowless. And the light,
bouncing off the water's surface, even
through the tinted windows, draws
my inattention. Because the river has
widened again and the power lines help it
not to lose the way. Thank you. I managed
once again to get a seat on the right side,
even though the far shore turns away and
floats out of sight somewhere to the left then
returns, straightforward, and the hills
stand just over the water soft strong,
not hills, cliffs.
But then on the river bottom, too,
things shift, the terrain changes,
the water's temper wavers. At Rhinecliff
the water's cooling down, as in that other Rhine, so
all the sun's for nothing. The water or the river? Am I
my body, am I my eye that's also
cooling but sees further off:
mountains and, right here, the ice flow?
And there's another bridge, frail, bright-dark
above the ice, with cars easing
into the air so clear and uncountable
that you don't know how to return
to a place full of individual days
and dreams that don't have time to take
like buds in April after a late freeze.
Thank you, today I sat on the right side,
on the side of the birds who don't feel the chill
and sit, feathered, on the water, paddle, flap,
look for food.

Labels: Halina Janod, Piotr Sommer, Polish Poetry
Newer Posts Older Posts Home
Subscribe to: Posts (Atom)
A poem (or more) will be offered by the hour or with the day and at the very least once a week. So stay on your webbed toes. The aim is to share good hearty-to-eat poetry. This is a birdhouse size file from the larger Longhouse which has been publishing from backwoods Vermont since 1971 books, hundreds of foldout booklets, postcards, sheafs, CD, landscape art, street readings, web publication, and notes left for the milkman. Established by Bob & Susan Arnold for your pleasure.
The poems, essays, films & photographs on this site are copyrighted and may not be reproduced without the author's go-ahead.
Write Bob or the Bookshop