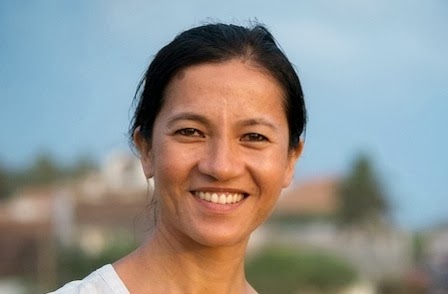 Tsering Wangmo Dhompa’s parents fled Tibet in 1959. Raised by her mother in Tibetan communities in Dharamsala, India, and Kathmandu, Nepal, Tsering earned a BA and an MA from Lady Shri Ram College in New Delhi, an MA from the University of Massachusetts Amherst, and an MFA in creative writing from San Francisco State University.

A friend of Longhouse, we published one of Tsering's earliest booklet of poems.


A hundred and one butter lamps are offered to my uncle who
is no more.

Distraction proves fatal in death. A curtain of butter imprints
in air.

After the burning of bones, ashes are sent on pilgrimage. You are
dead, go into life, we pray. My uncle was a man given to giggles
in solemn moments.

Memory springs like crocuses in bloom. Self conscious and
precise.

Without blurring the cornea, details are resuscitated. Dried yak
meat between teeth. Semblance of what is.

Do not be distracted, Uncle who is no more.

He does not see his reflection in the river. The arching of speech
over  s as he is becoming.

Curvature of spine as it cracked on a misty morning. A shadow
evades the wall.

You are no more, Uncle who is no more.

Every seven days he must relive his moment of expiration.
The living pray frequently amid burning juniper.

Somewhere along the line matters of motion and rest are resolved.

Crows pick the last offerings. You are someone else, uncle no
more.

Tsering Wangmo Dhompa
from Rules of the House  2003
Apogee Press

Labels: Tsering Wangmo Dhompa
Newer Posts Older Posts Home
Subscribe to: Posts (Atom)
A poem (or more) will be offered by the hour or with the day and at the very least once a week. So stay on your webbed toes. The aim is to share good hearty-to-eat poetry. This is a birdhouse size file from the larger Longhouse which has been publishing from backwoods Vermont since 1971 books, hundreds of foldout booklets, postcards, sheafs, CD, landscape art, street readings, web publication, and notes left for the milkman. Established by Bob & Susan Arnold for your pleasure.
The poems, essays, films & photographs on this site are copyrighted and may not be reproduced without the author's go-ahead.
Write Bob or the Bookshop