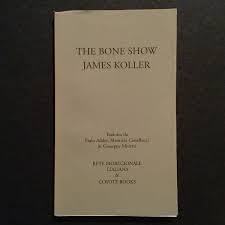 The folk literature of the world speaks from the

accumulated traditions of its own diverse beginnings.

Common to all these traditions are the desires to

understand and to participate in both the known and

the still-to-be-known worlds. It all adds up, the folk tell

us, will all make sense, someday, to somebody.

THE BONE SHOW is a ghost dance, a chronicle of

characters and ideas that, because of their folk origins,

are able to interact in and with the Present. They

remain able to move beyond the known, are able to

recreate from the Past, a Now and Future.

The inspiration and focus of the dance, the I CHING,

first appeared as an outgrowth of folk traditions in

ancient China. We know the eight characters who

move through the dance from European and North

American traditions as well as Asian. We know that

what was done before will be done again. We too, have

watched it happen. We know, even as we watch the

dancers change, that it's all the same dance.

Labels: Coyote Books, James Koller, poetry, The Bone Show
Newer Posts Older Posts Home
Subscribe to: Posts (Atom)
A poem (or more) will be offered by the hour or with the day and at the very least once a week. So stay on your webbed toes. The aim is to share good hearty-to-eat poetry. This is a birdhouse size file from the larger Longhouse which has been publishing from backwoods Vermont since 1971 books, hundreds of foldout booklets, postcards, sheafs, CD, landscape art, street readings, web publication, and notes left for the milkman. Established by Bob & Susan Arnold for your pleasure.
The poems, essays, films & photographs on this site are copyrighted and may not be reproduced without the author's go-ahead.
Write Bob or the Bookshop