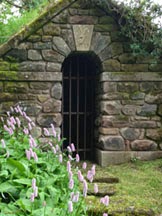 You won't remember me but I got some books off you many years back when I was in Northern Ireland - I was introduced to your work by Alec Finlay.

Anyway, life's quirks and turns have now brought me to where I am gardener at Little Sparta for the past 3 years and I have been enjoying the Birdhouse dispatches - and especially after todays piece thought I should get in touch again.

The house at Little Sparta and Ian's library is turning into a study centre - I don't know if you ever visited, but I came across some of your books as we were moving everything.

The garden has just closed for the year and I am putting everything under wraps - it looks like a ghost of itself….

I have many loves to speak of having your letter today — that you came my way through the book trade, from northern Ireland ( my mother's birthplace! ) and via Eck. Very nice. Quite nice. And everlasting.

Now you tell me you are a gardener at Little Sparta! Exceptional. I've no idea who has an eye on my daily Birdhouse but I am very thankful you dropped me a note about my wee one for Thoreau and Ian. I'll never have letters from him again, or to think he is up and about and capable of making and sending more postcards, booklets, and heaving grand statues onto the landscape. What a fellow.

I'm glad you are there. Ever thanks for letting me know some of my books gifted to Ian are still about the premises.

I never made it over. Ian had some dream notion of having me there to build him a stone hut. Eck said at the time his father was serious. The dream will last me until the end of time.

Take care of the place.

Many thanks for your reply - its always fascinating to see how things connect - a grand idea for a stone hut - - pity, it would have sat very well in the landscape here. I write a little bit about the garden each month, which might be interesting for you if only for the photos which show how the garden is now in its maturity, and how it looks out of season too when I have it all to myself -

Please tap onto this link for much more of George Gilliland, Little Sparta, and the current rhymes and rhythms of Ian Hamilton Finlay's home and garden. George's monthly garden journal is a treasury ~

Labels: Bob Arnold, George Gilliland, Ian Hamilton Finlay, Little Sparta (Scotland)
Newer Posts Older Posts Home
Subscribe to: Posts (Atom)
A poem (or more) will be offered by the hour or with the day and at the very least once a week. So stay on your webbed toes. The aim is to share good hearty-to-eat poetry. This is a birdhouse size file from the larger Longhouse which has been publishing from backwoods Vermont since 1971 books, hundreds of foldout booklets, postcards, sheafs, CD, landscape art, street readings, web publication, and notes left for the milkman. Established by Bob & Susan Arnold for your pleasure.
The poems, essays, films & photographs on this site are copyrighted and may not be reproduced without the author's go-ahead.
Write Bob or the Bookshop