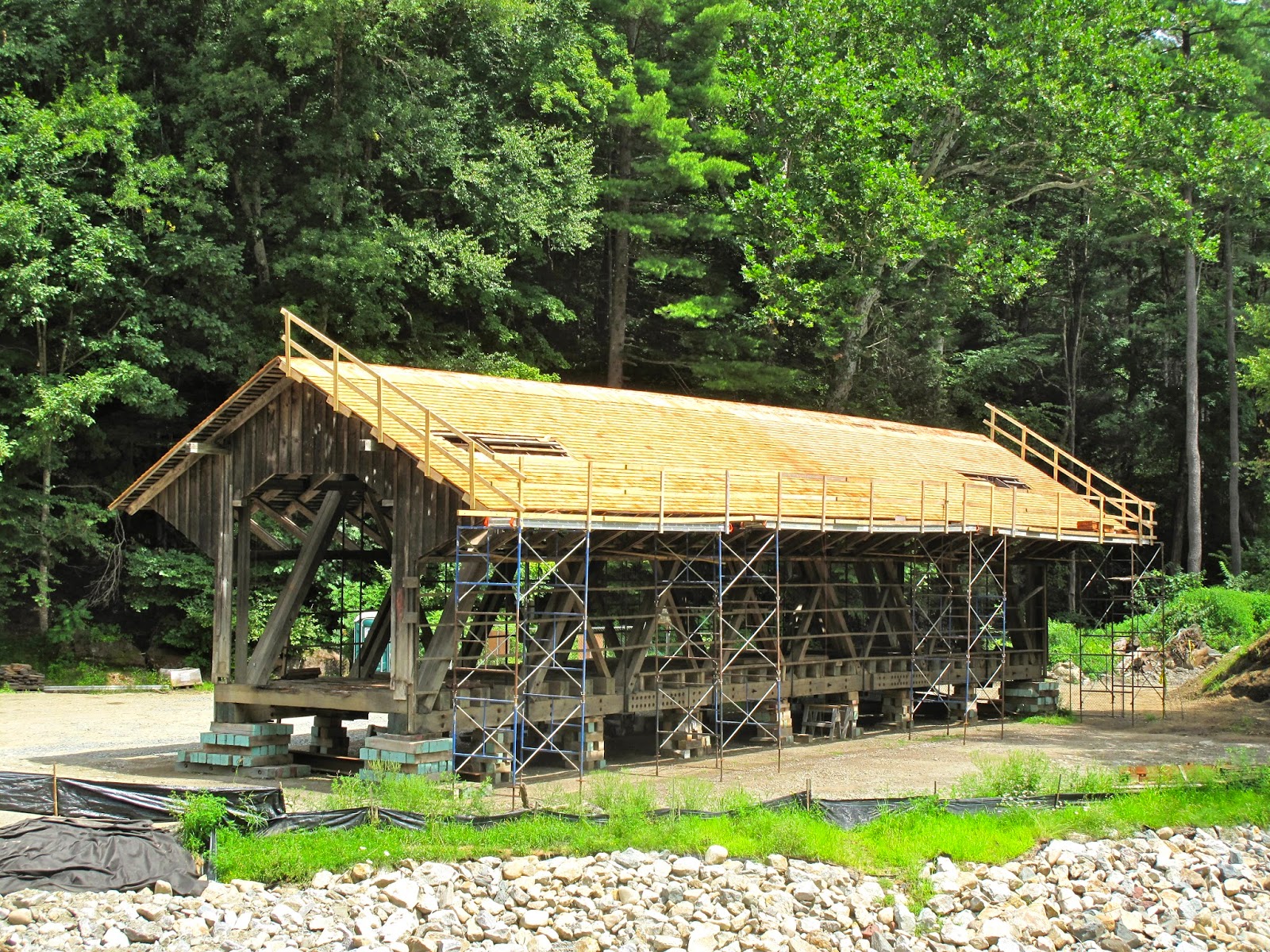 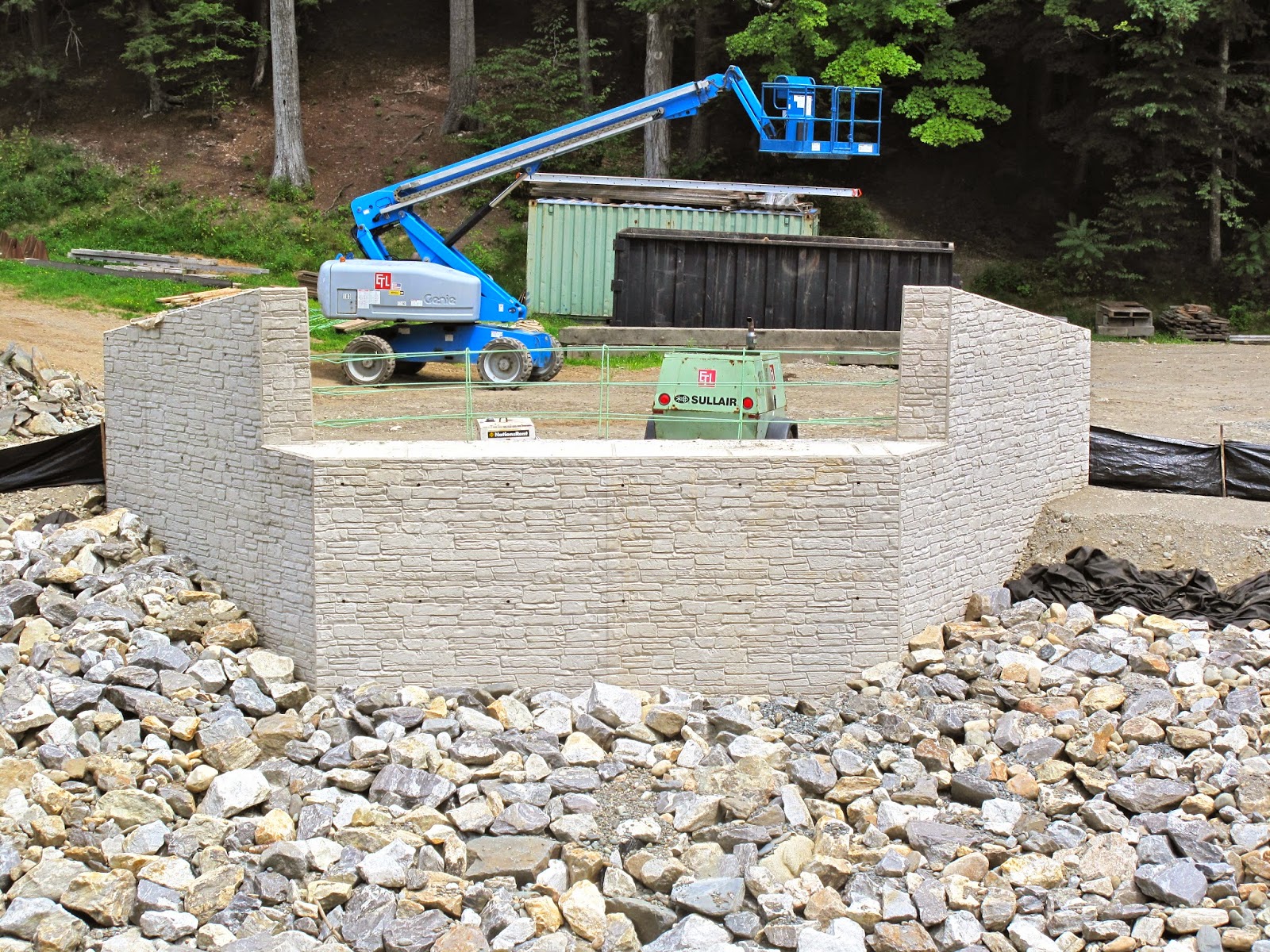 
The other day we took a trip down to see how work was going on the lower Green River in Greenfield, Massachusetts on the old Eunice Williams bridge at the pumping station. A bridge over decades we have traveled on by car, by foot, by bicycle. It's down in a hollow and has already had quite a history.

You can see the abutments are in place. A bit too phony stone for my taste, akin to what is being done on the massive overpass on Interstate 91 between exits 2 & 3 in Brattleboro, which should look impressive enough in that environment.  Better than plain concrete.

The work on the timber structure of the Williams covered bridge here is loyal and true. No fooling around, with a honey-edged new wood shingled roof. This is but one neighborly example of what can be done, on our same Green River.

Over the last week — despite being boxed out by a community organizer for a neighborhood Green River covered bridge event (Vermont), we've been very impressed with the devotion shown by town administrator for Guilford Katie Buckley to all events and sudden dramas brought on by the restoration of the Green River bridge. To say the least it isn't easy juggling all personal persuasions and new calamities. This is her job, and she's performing it wonderfully.

The Guilford Selectboard seem to have their thinking caps twisted on, and while part of the committee seems very pro-business, in fact biased, and to the point of forgetting there is also a strong ecology in the works here, I don't believe an old covered bridge can tolerate too much longer any talk of "putting off" serious restoration work on a structure that is begging to be done now. It seems part of someone is just allowing an old bridge to grow crooked and be pastured away as a tourist gallery, while asking citizens to "hound the state" to bring in a new modern bridge. A bridge that will change the light of day at whatever attracted you and me to this quiet river valley in the first place. Quiet today comes with a price and a personal sacrifice. You've got to drive extra miles, walk extra miles, plan and get strategic outside of your comfort zone and habit to keep something remarkable. Time has shown all covered bridges are remarkable.

A "temporary bridge" at $60,000 and change is one way to get a foot in the door by pro-business and development sleuths at establishing a new bridge format, and the frustration of many, hearing the covered bridge is out for a month, then two months, now three months, only raises the ante, and psychology, to appease our desperation. We shouldn't be impatient. And we shouldn't give-in and lose the larger world lifestyle of Green River made by many hands, farmers, home owners, artisans, the carving river and wildlife that all came before us. Actually they're asking us to 'take care' of what they left us. I knew some of those folks from long ago, so did you.

One point of information you might find interesting, there is an artisan in our midst working on the bridge right now. Peter Welch, stonewaller.  I've built with stone well over 40 years now and know another waller when I see one, and the other night I bicycled up to the village with Susan to watch a worker take care of things around the bridge for the next day's work. I didn't say a word after a hand wave back and forth, I just watched, for over an hour. The west stone wing of the bridge landscape is being done by a certified DSWA of GB Wallers. That means "Dry Stone Walling Association of Great Britian." Crackerjack craftsmen. I'm putting a link here for you to read more about the association:
http://www.dswa.org.uk/professional-services.asp
Feel lucky.

If the same care could be drawn into the covered bridge, as is being devoted to the abutment (the core), which should stand strong for over 200 years, we'd have something historical and memorable to remember our own heritage by. This is what forefathers and old farmers usually fall back on in their memories and stories — the real stuff —an old bridge that survived a hurricane, and slowed us and a whole valley down to the measure of a walk. Feel lucky a second time. Any Vermont town can have a bridge you can race across. A covered bridge — now there's something.

Labels: covered bridge, Rural Life and the Neighborhood (sister bridge)
Newer Posts Older Posts Home
Subscribe to: Posts (Atom)
A poem (or more) will be offered by the hour or with the day and at the very least once a week. So stay on your webbed toes. The aim is to share good hearty-to-eat poetry. This is a birdhouse size file from the larger Longhouse which has been publishing from backwoods Vermont since 1971 books, hundreds of foldout booklets, postcards, sheafs, CD, landscape art, street readings, web publication, and notes left for the milkman. Established by Bob & Susan Arnold for your pleasure.
The poems, essays, films & photographs on this site are copyrighted and may not be reproduced without the author's go-ahead.
Write Bob or the Bookshop