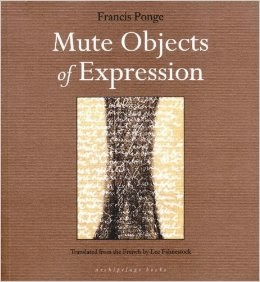 "Born in 1899, Francis Ponge studied both law and philosophy before taking up a variety of editorial and teaching jobs. Le parti pris des choses, published by Gallimard in 1942, caught the attention of writers and artists. Wide recognition came in the sixties when Gallimard published several large collections of his poetry and essays. Ponge avoided appeals to emotion and symbolism, and instead sought to minutely recreate the world of experience of everyday objects with playful neologisms and his own phenome- nological ballet. He described his poetry as "a description-definition-literary artwork" that avoided both the drabness of a dictionary and the inadequacy of poetry. He died in 1989. Lee Fahnestock is a translator and critic. Long an admirer of Ponge, she has published translations of Vegetation, The Nature of Things, and The Making of Pre. Her translation, with Norman MacAfee, of Victor Hugo’s Les Misérables and her translations of Jean-Paul Sartre’s letters to Simone de Beauvoir have been widely celebrated."

Labels: Francis Ponge, Lee Fahnestock
Newer Posts Older Posts Home
Subscribe to: Posts (Atom)
A poem (or more) will be offered by the hour or with the day and at the very least once a week. So stay on your webbed toes. The aim is to share good hearty-to-eat poetry. This is a birdhouse size file from the larger Longhouse which has been publishing from backwoods Vermont since 1971 books, hundreds of foldout booklets, postcards, sheafs, CD, landscape art, street readings, web publication, and notes left for the milkman. Established by Bob & Susan Arnold for your pleasure.
The poems, essays, films & photographs on this site are copyrighted and may not be reproduced without the author's go-ahead.
Write Bob or the Bookshop