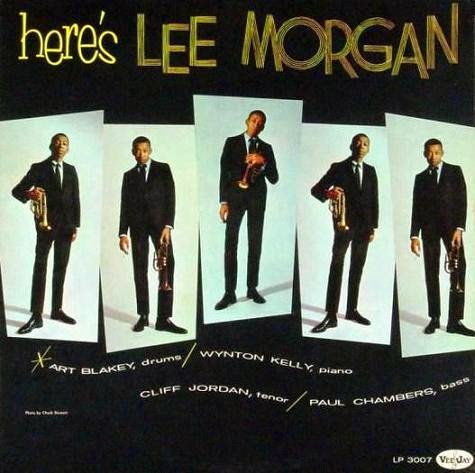 Here's Lee Morgan (1938-1972), already a veteran jazz trumpeter at age 21, joined on his eighth album with a stellar cast in this 1960 recording on the Vee-Jay label. Clifford Jordan on tenor sax, Wynton Kelly flowing on piano, Paul Chambers holding bass and the genius Art Blakey making drums. Morgan was shot to death by his common-law wife Helen More in 1972. The ambulance was reluctant to go into the neighborhood of New York's East Village where Morgan lay wounded and would bleed to death from one shot, in the jazz club called "Slug's Saloon."

Labels: Lee Morgan, Music Box
Newer Posts Older Posts Home
Subscribe to: Posts (Atom)
A poem (or more) will be offered by the hour or with the day and at the very least once a week. So stay on your webbed toes. The aim is to share good hearty-to-eat poetry. This is a birdhouse size file from the larger Longhouse which has been publishing from backwoods Vermont since 1971 books, hundreds of foldout booklets, postcards, sheafs, CD, landscape art, street readings, web publication, and notes left for the milkman. Established by Bob & Susan Arnold for your pleasure.
The poems, essays, films & photographs on this site are copyrighted and may not be reproduced without the author's go-ahead.
Write Bob or the Bookshop