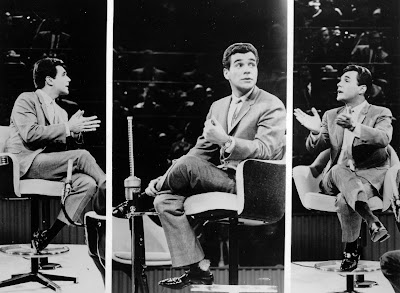 
Maybe the greatest talk-show (and radio-show) host you never saw or heard. Crane is remembered now for his "shotgun method" mic, where a microphone was swung out to the audience members to join in. . .a daring precursor to the likes of Phil Donahue, Don Imus, Howard Stern. A pioneer in the development of talk radio, Crane sparked and riled up his listeners and callers with his forthright style and confrontational techniques which seemed to also attract his guests, and he had beauties: the rarely seen on television Bob Dylan (shown here), Malcolm X, Robert Kennedy, George Wallace, Richard Burton, the first openly gay guest Randy Wicker (1964), and many other civil rights advocates of the time. He was loved by his followers and a thorn in the side to his promoters.


He began his radio career in 1958 at KONO in San Antonio, later moving to Philadelphia at call numbers WPEN. By 1962 he was steering KGO(AM) San Francisco with its powerhouse far reaching signal. It was Crane who was responsible for creating "the Top 40", so says none other than Casey Kasem. By 1963 Crane had shifted to a talk show on WABC—TV (NYC) where the first American TV appearance of The Rolling Stones took place, though only caught by New Yorkers. Leave it to Les Crane.


The late fifties and all of the sixties were his run and influence. By the late sixties he was hosting a talk show at KLAC (Los Angeles) now dressed in turtleneck and moccasins; by the 1980s he had shifted his talents as an innovator in the software industry. For whatever reason, perhaps neglect and stupidity on the part of owners, many of Crane's shows have been lost, or only the audio track has been left. After three marriages, including to Tina Louise from "Gilligan's Island" (Ginger), Crane died in California in 2008 at the age of 74. He was a handsome man.