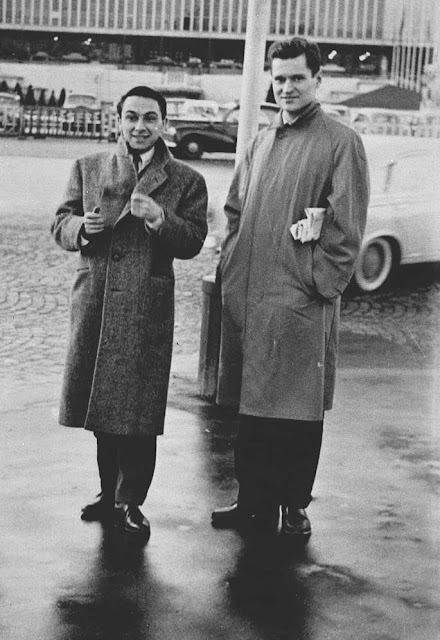 The rubble is still to come.
The exciting night sky was shining yesterday
On the usual fits of insomnia.
The young man decides to go away
Away from an obscure horoscope
In search of an obscure destiny
In the encouraging silence of the gods.

The intersecting routes the lost maps
The name drowned in foreign languages
His father and mother never knew.
The young man takes his sack and his stick,
Leaves it all to chance, to his good luck,
Spins around, and, far from his flocks
Walks toward his first meeting.

It's a woman and it's a dog
She smiles and she yaps
Singing amid the scattered bones
Something resembling the absurd question
The young man has never asked himself
Which he answers without thinking.
The sky falls like a night on his shoulders
The dog-woman dies inside a long howl.

And when he tries to return, yesterday is tangled.
There is no more tree or star or bed
Or woman or question or horoscope.
The crossroads is only a line without risk.
Nothing moves, a thread stands out, red
Against the sun. The rubble
Starts to smoke as in the past never.

Labels: John Ashbery, Pierre Martory
Newer Posts Older Posts Home
Subscribe to: Posts (Atom)
A poem (or more) will be offered by the hour or with the day and at the very least once a week. So stay on your webbed toes. The aim is to share good hearty-to-eat poetry. This is a birdhouse size file from the larger Longhouse which has been publishing from backwoods Vermont since 1971 books, hundreds of foldout booklets, postcards, sheafs, CD, landscape art, street readings, web publication, and notes left for the milkman. Established by Bob & Susan Arnold for your pleasure.
The poems, essays, films & photographs on this site are copyrighted and may not be reproduced without the author's go-ahead.
Write Bob or the Bookshop