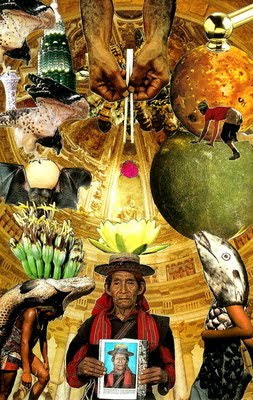 A rare chance to hear Daniel Abdal-Hayy Moore reading (and accompanying himself on zither) from his classic collection of shamanic poetry ‘Dawn Visions’, originally published by City Lights back in 1964, when the author was in his early twenties. The poems were written during explorations of mind and space in Mexico and California. As Moore describes it, a period of “immersion on the ocean of poetic inspiration, my near drowning in a sudden flood of imagery and pushing further and further, almost under water in it, surfacing to sing.” From a similar well sprung The Floating Lotus Magic Opera Company, which Moore founded in 1966, blending Zen Buddhism, music and dance of eastern folk theatre and Antonin Artaud into higher dimensions, performing their plays at night, in an amphitheater in North Berkeley, by torchlight.
In 1970 he renounced written poetry and became a sufi, traveling widely in Morocco, Spain, Algeria and Nigeria. Moore broke his silence in the early eighties and has since published numerous spiritually informed books 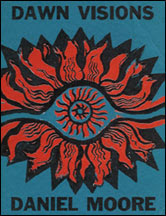