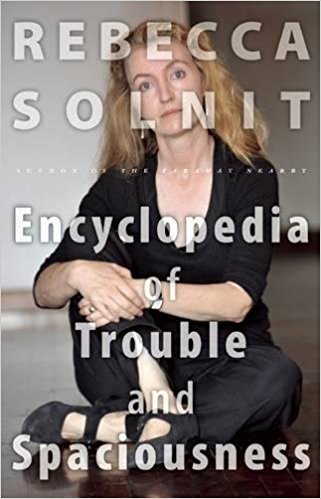 In her latest collection of previously published essays, Solnit (Men Explain Things to Me, 2014, etc.) explores troubled and troubling spaces and places that illuminate her concerns about community and power.
How, asks the author, do individuals express their sense of connection to one another when they respond to disasters, such as hurricanes Katrina and Rita, the BP oil spill, and the Tohoku earthquake and tsunami in Japan? How do communities come together for their common good? What social and political forces create a truly civil society? Solnit’s travels have taken her around the world, including Kyoto and Fukushima, Iceland, Mexico, Detroit and New Orleans: “Wherever I went,” she writes, “I remained preoccupied with democracy and justice and popular power, with how change can be wrought in the streets and by retelling the story, with the power of stories to get things wrong as well as right…and with the beauties of light, space, and solidarity.” Traversing time as well as space, she reflects on the social activism of the 1960s and ’70s that gave rise to communes, organic farms, and queer rights and feminist movements; sometimes chaotic and unfocused, this activism, she believes, sparked later progressive changes. Solnit is a fan of peaceful revolutions, which makes her impatient with the passivity that she observed in Iceland, where people seem intimidated in the face of severe environmental problems. Argentina, she notes, stands as a strong example of a politically engaged society uniting in protest in the face of economic disaster. Astounded by Icelandic acquiescence, Solnit urges her own contemporaries to take action on such issues as climate change, drought, urban blight, the tainting of soil by heavy metals, irresponsible oil drilling and the use of toxic dispersants.
In her 2006 commencement talk at the University of California, Solnit implored new graduates to remake the universe by changing stories of the past and reinventing stories for the future; that advice informs these thoughtful, eloquent and often inspiring essays.

In these times, this book is well worth a re-reading

Labels: Rebecca Solnit
Newer Posts Older Posts Home
Subscribe to: Posts (Atom)
A poem (or more) will be offered by the hour or with the day and at the very least once a week. So stay on your webbed toes. The aim is to share good hearty-to-eat poetry. This is a birdhouse size file from the larger Longhouse which has been publishing from backwoods Vermont since 1971 books, hundreds of foldout booklets, postcards, sheafs, CD, landscape art, street readings, web publication, and notes left for the milkman. Established by Bob & Susan Arnold for your pleasure.
The poems, essays, films & photographs on this site are copyrighted and may not be reproduced without the author's go-ahead.
Write Bob or the Bookshop