But where are the snows of yester-year?  — François Villon


Let's talk a moment about this last long winter. There are a few things to be said.

I was recently in attendance at an early morning book sale in a small Vermont town. Geraniums nodding out in the front of the building with the sun, not selling and maybe too expensive, but it was a plant sale nonetheless and the mainly elderly women who were working well at it had modest hopes everything would go well. If I wanted to contribute to that thought, I was welcome.

But how long was the winter we had all just passed through?

I heard it spelled out by three old women talking as they rustled books for the sale onto a table with one already lamenting, "I have so little time to read. When do you both have the time?"

One woman stayed silent while the other jumped on her high horse. "My goodness, after this past winter and how looonngg it was, it was the perfect time to read books. And I did. Plenty!"

That pretty much buttoned up and nailed down the thought, constant on the country dweller's mind, of 'where is the time?'

The New York Times, and our governor, tell us that there is so much time and so much boredom and so much unemployment in the back hills of Vermont that the only remedy amongst the constituents is to get yourself addicted to heroin. Forget books. Trees. Cows. Fields. Mountains and rivers without end. Become a junkie.

Our old ladies weren't part of this. That was another Vermont. But it could easily be their neighbors.

By the way, where are the young women, never mind the young men and the young people in general at these plant and book sales? Are there no longer mothers and grandmothers nabbing their grandchildren by the ear lobes and dragging them at the crack of dawn to work over these grand socialist community events? Books for a dollar or so, plants all bright and rain revived, packed into the school where they went to school. It all seems part and parcel to how one should grow up. Assist where you have been. Assist what once assisted you.

For a short piece of our long winter we did watch, like clockwork, each Sunday, our fill of cherry pie "Downton Abbey". We enjoyed it while watching, and even talked it up after each episode with two neighbors we would meet on our daily hikes in the woods along the river, but overall this past year's series was uneventful. Forgettable. Dry toast. No pie.

Which then got us hooked into the legend of "Game of Thrones." One should have an opposite of the Downton cycle just for measuring the imagination and the mind, keep the juices flowing, enjoy some spunk. Not quite resorting to pornography, however "Game of Thrones" almost is. I like the dwarf Tyrion (the most expressive face) and I like the Hound (another face) and I didn't like at all Ned Stark losing his head since he remains the only champion in all the lot, but then there's Jamie, who is cute (until he cut off all his hair) and it doesn't seem to matter that he had his good sword hand chopped off — remember, he's cute. And how in the world I returned to even having any care for the guy after he pushed the little kid out of the tower window — yes, yes, I realize Jamie was in the throes of sexual orgasm with his sister when the little kid stuck his face into the room, but still, a little kid? pushing him to his death? Except the kid didn't die since we're in a fantasy, and in a fantasy you can get away with any damn thing you please. It isn't a book sale where 50% of the books are junk and heading to the dump. The real life dump.

I also like the very tall and noble and hair cropped blond knight in shining armor who I've never paid attention to get the name of. For me she's the-tall-tall-woman-good-with-a-sword. Who bonded with Jamie, and she's the next best thing to Ned Stark when it comes to honor and grace. She better not lose her head.

Today honor loses its head. We fail to realize and understand that we are, often against our best intentions, becoming the very worst of our abilities because of the company we keep. The company that has been given to us. The company we have accepted. The company we've even rejected. The company we have become. Be careful when watching any t.v. And the very best portion of a book is you can talk back to the book, close it up and put it down and take a walk, there's a reflective depth and quiet between you both as you make your rounds. You know the book is set on the table waiting for you to return. You can see it. There is a still life resonance. A book on a screen is just another t.v. Try to make your encounters reciprocal. Nice try creators of the fine film "Her" — but a girl in the hand isn't better than one in the bush.

As Sweetheart says about "Game of Thrones" television creators — not to be confused with the old fart in New Mexico stirring up in his cauldron the big, fat books the television show pulls its magic from — "It's 20 and 30 year olds writing this stuff, any thing goes."

Yes, while another Spring has come. 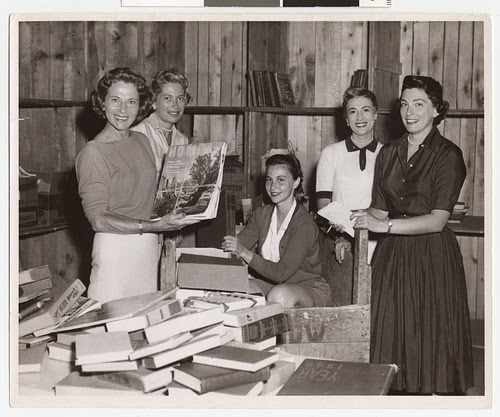 A once upon a time book sale crew

Labels: Book sales, Game of Thrones
Newer Posts Older Posts Home
Subscribe to: Posts (Atom)
A poem (or more) will be offered by the hour or with the day and at the very least once a week. So stay on your webbed toes. The aim is to share good hearty-to-eat poetry. This is a birdhouse size file from the larger Longhouse which has been publishing from backwoods Vermont since 1971 books, hundreds of foldout booklets, postcards, sheafs, CD, landscape art, street readings, web publication, and notes left for the milkman. Established by Bob & Susan Arnold for your pleasure.
The poems, essays, films & photographs on this site are copyrighted and may not be reproduced without the author's go-ahead.
Write Bob or the Bookshop