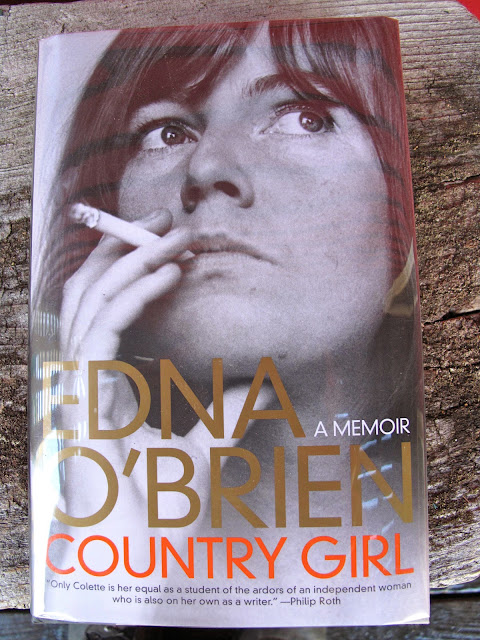 Now and then I loose my mind and can pleasantly landslide with my emotions at such beautiful writing — I've had this happen reading Yeats The Celtic Twilight, Synge's Aran Island book, James Stephens, Crock of Gold, Patrick Kavanagh's The Green Fool, and now Edna O'Brien's Country Girl. What do you know, they're all Irish.


The O'Brien memoir has just been released in the U.S., a spring foal, and I can't help but think it's an immediate age old classic. A book to own, a book to pass down, a book to gift to a young woman or daughter, or graduate. Yourself.


This book must be read to be believed. I'm only 80 or so pages into the life story and having read O'Brien all my life I'm fairly confident she is going to handle this into a masterpiece — mostso with those early childhood years tucked away in Ireland. I'm only 80 pages and days picking the book up and setting it down, taking it with us on drives, read two more chapters between stacking firewood — I don't want the book to ever end! so I'm taking my sweet old time. A few sentences can satisfy the reader for a whole day. I call that poetry.

"The first book that I recall holding in my hand was a cloth book with pictures and a rhyme:

Hey diddle diddle
The cat and the fiddle,
The cow jumped over the moon,
The little dog laughed
To see such sport,
And the dish ran away with the spoon.

The letters, tall and painted, were like the painted pillars of a house that would never tumble.

Sitting on my mother's lap, smelling her smell, feeling the itch from the wool of her cardigan, the particular heave of her chest, I studied every feature of her face, which was so beautiful to me, except for the forehead, a map of wrinkles, and on that map I wrote my first words, in praise of her."

[a little further on in the same chapter titled "Books"]

"I would go out to the fields to write. The words ran away with me. I would write imaginary stories, stories set in our bog and our kitchen garden, but it was not enough, because I wanted to get inside them, in the same way as I was trying to get back into the maw of my mother. Everything about her intrigued me: her body, her being, her pink corset, her fads, and the obsessions to which she was prone. One was about a little silver spoon from a set of six that she had had since her honeymoon. They were kept in a velvet-lined case, the velvet faded and milky, and they were once loaned to the vocational school when dignitaries were coming for a function. However, when the case was returned, there was one spoon missing, and my mother got on her bicycle and went in high dudgeon to the school. There was a thorough search, in drawers, in cupboards, under tables, in the pantry, in two bins, and in the turf shed. Inquiries were sent all over the village, but somehow my mother knew in her bones that she would never see that spoon again, and she never forgave it. She was convinced that she knew who had taken it, a shopkeeper who was jealous of our semi-grandeur, and ever after there was a coolness between them.

When, much later, I wrote about my mother, that preoccupation with her had intensified so that she permeated all worlds — Her mother was the cupboard with all the things in it, the tabernacle with God in it, the lake with the legends in it, the sea with the oysters and the corpses, a realm into which she longed to vanish forever."