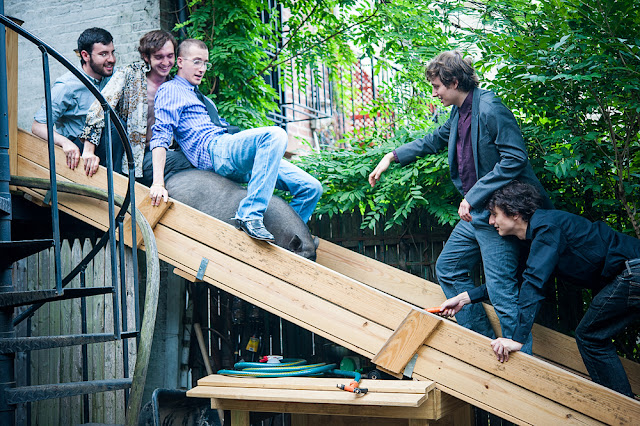 
The guardian angel sits in the tree
above the black lip of street
the man walks down.
He calls the man Cargo.
The angel sees a pinewood box in place of the man,
and the street he walks is a boat,
the hull like a coal crater.
Somewhere in the real world there is such a boat and box.
The angels call these overlays dreams,
and believe they crop up because angels
can’t sleep but want to —
space falls apart when you have unlimited time.
•
The cargo is rattling in the boat.
Maybe it’s just the waves, maybe it’s rats.
What’s the difference? Either way: it’s the box.
The angel sends the man
a happy vision from his past — the time
he fed birthday cake
to his goldfish
after an unsuccessful party.
The angel thinks he’s applying lemon oil
to the creaky, wounded wood of the box.
He knows it’s palliative, but it’s beautiful.


•
The man reaches the end of the street. He’s a sick man
and he starts to ponder death
as he often does these days:
All of death is right here
— the gods, the dark, a moon.
Where was I expecting death
to take me if everywhere it is
is on earth?
At life’s close, you’re like the child whose parents
step out for a drive —
everyone else out on a trip,
but the child remains in the familiar bed,
feeling old lumps like new
in the mattress — the lights off —
not sleeping, for who can sleep
with the promise of a world beyond the door?


•
That night the child dreams
he’s inside the box.
It’s burning hot, the heat coming
from bugs and worms
raping and devouring one another.
He starts the hard work
of the imagination,
learning to minister to the new dream.
Perhaps all that’s needed is a little rain —
for everyone to drink and have a bath.
Outside: a car humming,
somewhere, his mother’s singing.

Max Ritvo
Four Reincarnations
Milkweed 2016
A U D I O

Labels: Max Ritvo (poem)
Newer Posts Older Posts Home
Subscribe to: Posts (Atom)
A poem (or more) will be offered by the hour or with the day and at the very least once a week. So stay on your webbed toes. The aim is to share good hearty-to-eat poetry. This is a birdhouse size file from the larger Longhouse which has been publishing from backwoods Vermont since 1971 books, hundreds of foldout booklets, postcards, sheafs, CD, landscape art, street readings, web publication, and notes left for the milkman. Established by Bob & Susan Arnold for your pleasure.
The poems, essays, films & photographs on this site are copyrighted and may not be reproduced without the author's go-ahead.
Write Bob or the Bookshop