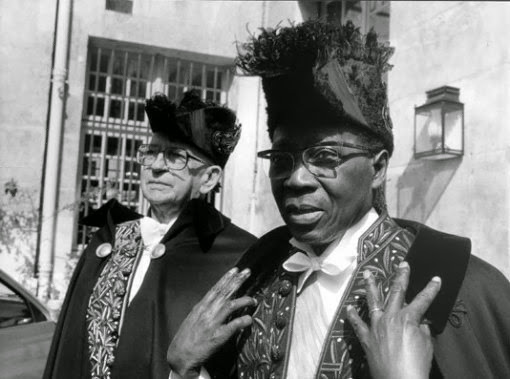 
(for jazz orchestra and trumpet solo)

New York! At first I was bewildered by your beauty,

So shy, at first, before your blue metallic eyes and icy smile,

So shy. And full of despair at the end of skyscraper streets

Raising my owl eyes at the eclipse of the sun.

Your light is sulphurous against the pale towers

Whose heads strike lightning into the sky,

And weathered skin of stone.

But two weeks on the naked sidewalks of Manhattan—

At the end of the third week the fever

Overtakes you with a jaguar’s leap

No laugh from a growing child, his hand in my cool hand.

No mother’s breast, but nylon legs. Legs and breasts

Without smell or sweat. No tender word, and no lips,

Only artificial hearts paid for in cold cash

And not one book offering wisdom.

Stirring with delusions while car horns blare the empty hours


Now is the time of signs and reckoning, New York!

Now is the time of manna and hyssop.

You have only to listen to God’s trombones, to your heart

Beating to the rhythm of blood, your blood.

I saw Harlem teeming with sounds and ritual colors

At teatime in the home of the drugstore-deliveryman

I saw the festival of Night begin at the retreat of day.

And I proclaim Night more truthful than the day.

It is the pure hour when God brings forth

Life immemorial in the streets,

A green breeze of corn rising from the pavements

And mangoes of love rolling from the low houses

To the feet of police horses.

And along sidewalks I saw streams of white rum

And streams of black milk in the blue haze of cigars.

And at night I saw cotton flowers snow down

From the sky and the angels’ wings and sorcerers’ plumes.

Your vibrant oboe voice, the muted anguish of your tears

Falling in great clots of blood,

Listen to the distant beating of your nocturnal heart,

The tom-tom’s rhythm and blood, tom-tom blood and tom-tom.

Let it wash the rust from your steel joints, like an oil of life

Let it give your bridges the curve of hips and supple vines.

The reconciliation of the Lion and Bull and Tree

Idea links to action, the ear to the heart, sign to meaning.

And sea cows with mirage eyes. No need to invent the Sirens.

Just open your eyes to the April rainbow

And your eyes, especially your ears, to God

Who in one burst of saxophone laughter

And on the seventh slept a deep Negro sleep.


Léopold Sédar Senghor (1906–2001) was Senegal’s first democratically elected president from 1960 to 1981. A poet, writer, and statesman Senghor was born near Dakar in the town of Joal to a Fulbe mother and a Serer trader father. He was educated at the École Nationale de la France d’Outre-Mer in Paris, where he became friends with Aimé Césaire who he co-founded the Negritude movement, which promotes distinctly African cultural values and aesthetics, in opposition to the influence of French colonialism and European exploitation. After earning his French citizenship, Senghor taught in Tours and Paris. He joined the French army during World War II and spent 18 months in a German prison camp. After serving successive terms representing Senegal in the French National Assembly, Senghor returned to his native land, where he led his nation’s independence movement in 1960.

Residing part-time in France, he wrote poems of resistance in French.  His nonfiction work includes numerous volumes on politics, philosophy, sociology, and linguistics.

He passed away at his home in France at the age of 95.

Labels: Léopold Sédar Senghor, Melvin Dixon
Newer Posts Older Posts Home
Subscribe to: Posts (Atom)
A poem (or more) will be offered by the hour or with the day and at the very least once a week. So stay on your webbed toes. The aim is to share good hearty-to-eat poetry. This is a birdhouse size file from the larger Longhouse which has been publishing from backwoods Vermont since 1971 books, hundreds of foldout booklets, postcards, sheafs, CD, landscape art, street readings, web publication, and notes left for the milkman. Established by Bob & Susan Arnold for your pleasure.
The poems, essays, films & photographs on this site are copyrighted and may not be reproduced without the author's go-ahead.
Write Bob or the Bookshop