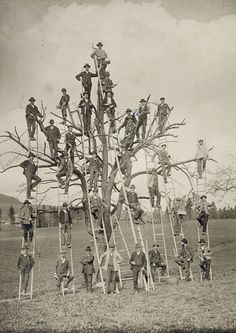 no matter how hard his girlfriend tried

who was my close friend

or the truck we drove

or the food we ate

from a long way back he had his reasons

long before he knew us

and those guys are the worst

I hadn’t seen him in a very long time

twenty years or better, which is a long

towns, and we had both come into the bigger

town at exactly the same time to have a bite

to eat — I saw him walk in and had no idea

who he was, except I liked his very long goatee

which I liked again when he came over to our

table to say hello — the luxurious ponytail was

gone, the head was shaved, but it was the same

smile and laughter, and it’s always been a

miracle to me how our voices never change —

we caught up twenty years in far less than

twenty minutes, when another friend arrived

and another friend was gone

Then there was the time
The tree crew boss, Will,
Sent Davey up the road along the river
To work up the red oak logs that had
Fallen down over the bank after the big
Tree was dropped into the road and shoved around.

Davey nodded with no words and took a pickup truck with him.
One of us thought we'd get up there before too long to help Davey
But before we knew it Davey had the pickup packed tight with
Bucked up logs and it looked overblown even from a
Distance since the truck had a cab on the back and
Walking closer something didn't look right —

Now Davey was new to the crew, one year.
Next to Will he was the biggest on the crew —
Strong arms and an all-day working back and he liked
Driving the large truck with bucket to far-flung job sites
Just like this one — miles from any town, a deep wooded
Valley with a river running through, houses tucked away.

One of the houses was mine and the crew was working on
My land, for the electric company, cutting out a right-of-way
Path for new lines. I was an adopted member of the crew for
This job and we made fast friends, and Will overseeing all was
A classic hardworking maverick not at all minding doing a job
That cut and trimmed trees mindful of not being a butcher —

In other words, a great guy. Getting everything right for the
Electric company within reason, and keeping the woodlands
Woodlands. It's the difference between war and peace and Will
Was a peaceful man the size of a bear. He could chop apart the
Biggest tree in the way, or trim it with the delicate touches of
Decorating a Christmas tree; whatever seemed right. A thinker.

Davey had worked as a cook in restaurants before this. The rest
Of the crew liked to tease him playfully as he worked his body
Rhythm into a stamina to take the daily pounding and thrashing with
Chain saws and hour after hour feeding a chipper with branches
And bramble. He smiled slowly and a few missing teeth from a
Party when he was 17 said you should see the other guy. Bruiser.

So we come up to the bruiser and he's spent and sweated through
Hair all mussed and shoulders starting to slump because the logs
He's cut up were down deep over the road bank and he had to haul
Some up by chain. Now two trees were cut the same day and at the same
Location, but Davey wasn't around the day the huge oak was dropped with
The big basswood tree right alongside it. To a former cook, who said

He liked to eat Cheerios in the morning for breakfast, the course
Bark of the basswood might look like oak. A trained woodsman would
See the difference right-off and we all did when we approached the truck
Stuffed to the gills with basswood logs, that was loaded by Davey for me
To bring home to split as red oak, premium firewood, where I couldn't
Say much of a word after all the bullwork Davey put into the load.

So I listened to the crew chide him
And they did,
For a few days.
I later stayed home and
Hand-split junk I otherwise
Wouldn't look twice at.