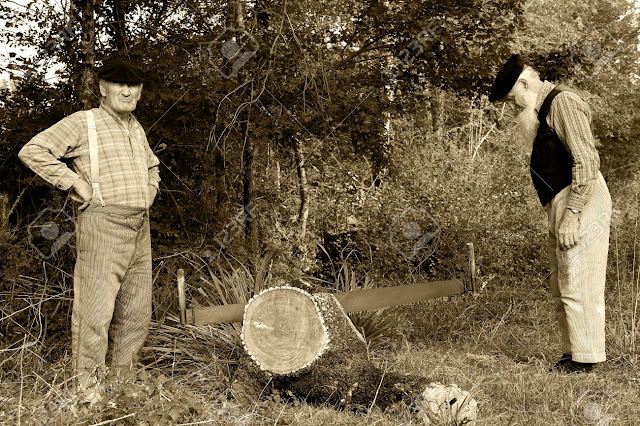 Clayton always had a pricky word

To say about the hippies.

They lived in a commune

Over the hill from his farm.

He ran into them at three places

At any one time during the year —

Either when he was hunting the hill

As he did every year for 40 years,

Or when he was running his snow-machine

On the back roads.

Finally he would see them in town

Every other Friday, when he was

Cashing his check from the state park.

And they was always cashing

Some other kind of check,

Of course I was a hippie to Clayton too

Because I had the long beard,

But we worked together when he came home

To his farm on the river.

Helped him screed the foundation floor

Under his house and lay down the roof, too —

But one day I’ll never forget

Was when we were haying the lower mowing in August —

His wife had moved out long ago

And he was living with his son

And the big TV antenna.

But these summer days were spent

Waiting on the weather

And broken down farm machines.

We had just finished up work,

Had the trailer swayed down loaded

With 200 bales and were coming around

The bend near the second swimming hole

When Clayton caught sight of something

In the shallow part of the river —

A young woman soaping herself

And blonde naked as pine lumber,

Sunlight enshrined in the water

Until we got broadside with her,

Then we looked straight ahead

But I know she didn’t move.

Further up the road

Around in the tractor seat,

Looked back where I was

Holding onto the trailer stakes

And hollered, “I never did mind the hippie women!”

When he came out the back door

Into his woodshed and caught

Digging through his trash.

According to the story

He told the game warden

Was that the pup attacked him,

So he had to shoot it.

He knew from past experience

Of his own that Farlow’s wife

Had left him six months

After they moved here from Connecticut.

He was spending weekend nights

In bars in town after work,

But most probably not.

A quarter-mile away from where

He sat nights in his kitchen —

If he used the scope of his rifle

He could even see more.

As winter sunk in

Wandering around the house weekends,

And shooting his rifle off for hours

In his field on Sunday afternoons.

The house was said to have an arsenal —

Maybe 30 rifles and pistols for one man —

And it only took one to shoot the dog.

After that, Clayton didn’t deal with him,

And in turn Farlow leased out his hayfield

To someone else, instead of Clayton —

Since then both men have remarried,

Moved away, and the house of Farlow’s

Was bought by a millionaire gentleman farmer.

In his field on a Sunday afternoon,

Even though he is long gone.

Clayton’s son says they have so many puppies

Around at his father’s old place

That they’ll probably have to drown a few of them

In the river this spring.

Labels: Bob Arnold, Vermont, Where Rivers Meet
Newer Posts Older Posts Home
Subscribe to: Posts (Atom)
A poem (or more) will be offered by the hour or with the day and at the very least once a week. So stay on your webbed toes. The aim is to share good hearty-to-eat poetry. This is a birdhouse size file from the larger Longhouse which has been publishing from backwoods Vermont since 1971 books, hundreds of foldout booklets, postcards, sheafs, CD, landscape art, street readings, web publication, and notes left for the milkman. Established by Bob & Susan Arnold for your pleasure.
The poems, essays, films & photographs on this site are copyrighted and may not be reproduced without the author's go-ahead.
Write Bob or the Bookshop