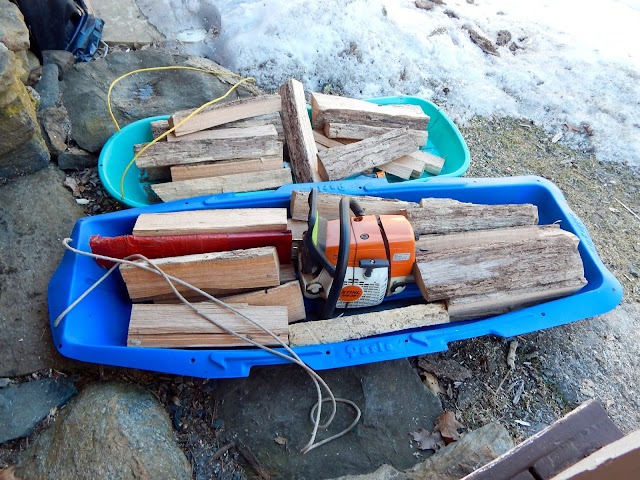 We were up in the woodlot, full sunshine, this afternoon
barely any snow now, certainly ground plain of ice
Here's a photograph of bringing home over the ice
sliding like kites
two sled loads of dry oak
We left a good size pile of hand split oak
up in the woodlot for another day
when a bit more snow falls

For all our Hillary Clinton fans, and we
know you're out there friends
but we don't like the war-hawk Hillary
the liar Hillary, the daddy war-bucks Hillary
Goldman Sachs Hillary
any more than we any longer like our
Vermonters Peter Shumlin and Patrick Leahy
not rooting for their home town boy, Bernie


We would love a woman President!
Could you bring back Shirley Chisholm?
or ask Angela Davis, how about Elizabeth Warren?!
We'll wait for Elizabeth Warren —
if she even wants to bother
with this circus

Bernie should sit down on the end of the log
with Donald Trump and I bet he could
teach him some things —
after all, this great country was cut out
of raw wood by salesmen / con men (Trump)
and freedom riders (Bernie)
and an independent mind
is a glorious thing

Labels: Bernie Sanders, Bob Arnold, Vermont, Woodcutting
Newer Posts Older Posts Home
Subscribe to: Posts (Atom)
A poem (or more) will be offered by the hour or with the day and at the very least once a week. So stay on your webbed toes. The aim is to share good hearty-to-eat poetry. This is a birdhouse size file from the larger Longhouse which has been publishing from backwoods Vermont since 1971 books, hundreds of foldout booklets, postcards, sheafs, CD, landscape art, street readings, web publication, and notes left for the milkman. Established by Bob & Susan Arnold for your pleasure.
The poems, essays, films & photographs on this site are copyrighted and may not be reproduced without the author's go-ahead.
Write Bob or the Bookshop