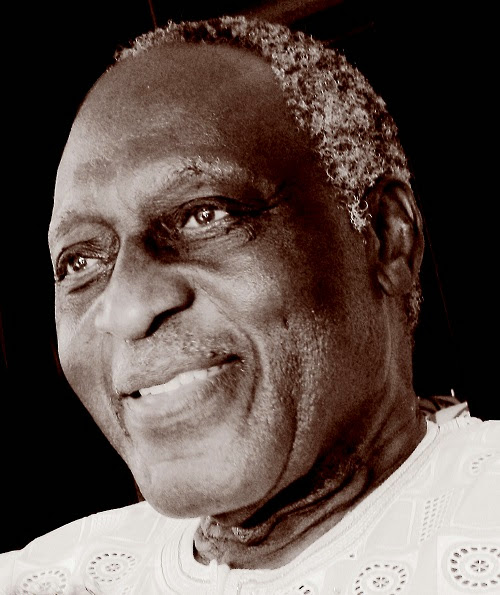 
After a week of somewhat dark Birdhouse reports — whether about Home Depot sprawl or a gunman knocking himself out in Washington DC — comes a report that the Ghanaian poet, Kofi Awoonor, age 78, was one of the victims at the shooting massacre at the Westgate Shopping Mall, Nairobi, Kenya, by the Al-Shabaab militant group. He was in Nairobi to perform that Saturday evening at the Storymoja Hay Festival, a four day celebration of writing, thinking and storytelling. His son was also struck by the shooters but survived. A stop in your footsteps shame. No one is immune, and that's quite the point.

Between texting, Facebook, no fullness of communication, all email snippets, lots of mindless chatter, constant noise from media, traffic, jobs, news — we are moving to a wordless time. Where gunfire will be heard.

A resonant moment for Kofi Awoonor, at least, and then a move into sunlight.


This Earth, My Brother


The dawn crack of sounds known
rending our air
shattering our temples toppling
raising earthwards our cathedrals of hope,
in demand of lives offered on those altars
for the cleansing that was done long ago.
Within the airwaves we carry
our hutted entrails; and we pray;
shrieks abandoned by lonely road-sides
as the gunmens boots tramp.
I lift up the chalice of hyssop and tears
to touch the lips of the thirsty
sky-wailing in a million spires
of hate and death; we pray
bearing the single hope to shine
burnishing in the destiny of my race
that glinting sword of salvation.
In time my orchestra plays my music
from potted herbs of anemone and nim
pour upon the festering wounds of my race,
to wash forever my absorbent radiance
as we search our granary for new corn.
There was that miracle we hoped for
that salvation we longed for
for which we said many prayers
offered many offerings.

In the seasons of burning feet
of bad harvest and disastrous marriages
there burns upon the glint edge of that sword
the replica of the paschal knife.
The sounds rounded our lonely skies
among the nims the dancers gather their cloths
stretching their new-shorn hides off offered cows
to build themselves new drums.
Sky-wailing from afar the distant tramp
of those feet in rhythm
miming underneath them violence.
Along the roads lined with mimosas
the mangled and manacled are dragged
to the cheers of us all.
We strew flowers at the feet of the conquerors
beg for remission of our sins…

…He will come out of the grave
His clothes thrown around him;
worms shall not have done their work.
His face shall beam the radiance of many suns.
His gait the bearing of a victor,
On his forehead shall shine a thousand stars
he will kneel after the revelation
and die on this same earth.

And I pray
That my hills shall be exalted
And he who washes me,
breathes me
shall die.
They led them across the vastness
As they walked they tottered
and rose again. They walked
across the grassland to the edge of the mound
and knelt down in silent prayer;
they rose again led to the mound,
they crouched
like worshipers of Muhammad.
Suddenly they rose again
stretching their hands to the crowd
in wasteful gestures of identity
Boos and shrieks greeted them
as they smiled and waved
as those on a big boat journey.
A sudden silence fell
as the crowd pushed and yelled
into the bright sharp morning of a shooting.

They led them unto the mound
In a game of blindman’s bluff
they tottered to lean on the sandbags
Their backs to the ocean
that will bear them away.
The crackling report of brens
and the falling down;
a shout greeted them
tossing them into the darkness.

and my mountains reel and roll
to the world’s end.