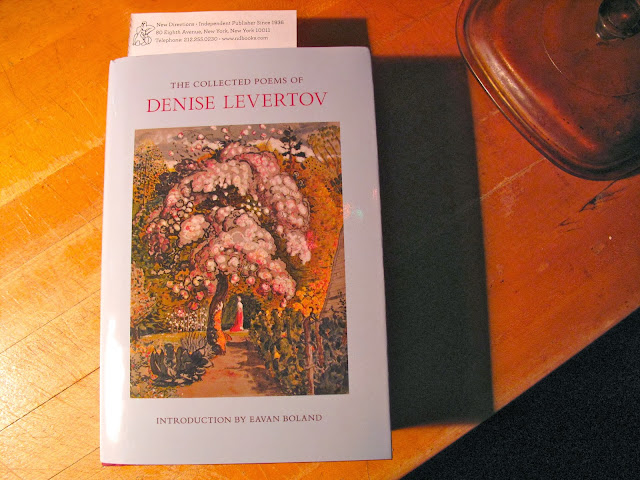 I imagine someone will find something to pester about with this massive and holy beauty of a book, but I can't be bothered. Like I say, it's a beauty. The poet is long gone but certainly not to the memory of many of us who grew up with her books, issued one after another from New Directions (the faithful), and many of us knew Denise Levertov as friend, teacher, fellow contributor, activist, neighbor. We could even stretch it and say to many poets now in their late 50s to early 70s, who may recall a time when Levertov was a sort of earth mother poet to them, or sister. The poem below will just begin to show (but amply) her ability as mesmerizing storyteller — this poet who began to write her poems at age 5. And this poem has deep ingredients of Richard Jefferies roaming the same countryside, even the skilled wandering discipline of Williams (his longer poems; he will become a confidant and friend), Dorothy Wordsworth's journals, perhaps the balancing scales of Virginia Woolf. But it's all wickedly private/public Denise Levertov. As Eavan Boland makes note in her excellent introduction to this tome — you can sense the power of the poet right from the first line.

There's a lot going on here with this book. First, it's gorgeous coming into your hands, and almost heartbreaking to see such a devoted publisher as New Directions sticking to their guns with one of their poets . . . a woman poet, who never get enough big book attention. If they wanted to make a lasting monument, they have. It's over 1,000 pages true. Precious little waste, if any. The founder of New Directions, James Laughlin, is all throughout the book with his earnest for Levertov to be in his stable, after west-coast-both-feet-on-the-ground-genius Kenneth Rexroth introduced Levertov's poems to his poet/publisher friend. It was a good time for things to take off, and it did.

Later years brought this forever independent (Levertov) from no set school or sect, but her own, to Stanford, other parts west coast, and Seattle. Eavan Boland divides her time at Stanford and Dublin; scholars, other poets, students and a readership just carried on a momentum. Something the two editors of this book, and publisher, have handled well. The poet's individual books unfold in chronological order, along with extensive annotations and notes by Levertov herself on many of the books, when not poems. First lines are properly indicated as an index. It'll all come in time though, because you'll be holding the book in your two hands for awhile and not even wanting to open its leaves for a few moments. There's an absorbing ritual — a nearly forced will — that asks you to slow down, take a moment, and breathe in the apple you're about to bite.


Something forgotten for twenty years: though my fathers
and mothers came from Cordova and Vitepsk and Caernarvon,
and though I am a citizen of the United States and less a
stranger here than anywhere else, perhaps,
I am Essex-born:
Cranbrook Wash called me into its dark tunnel,
the little streams of Valentines heard my resolves,
Roding held my head above water when I thought it was
drowning me; in Hainault only a haze of thin trees
stood between the red doubledecker buses and the boar-hunt,
the spirit of merciful Phillipa glimmered there.
Pergo Park knew me, and Clavering, and Havering-atte-Bower,
Stanford Rivers lost me in osier beds, Stapleford Abbots
sent me safe home on the dark road after Simeon-quiet evensong,
Wanstead drew me over and over into its basic poetry,
in its serpentine lake I saw bass-viols among the golden dead leaves,
through its trees the ghost of a great house. In
Ilford High Road I saw the multitudes passing pale under the
light of flaring sundown, seven kings
in somber starry robes gathered at Seven Kings
the place of law
where my birth and marriage are recorded
and the death of my father. Woodford Wells
where an old house was called The Naked Beauty (a white
statue forlorn in its garden)
saw the meeting and parting of two sisters,
(forgotten? and further away
the hill before Thaxted? where peace befell us? not once
but many times?).
All the Ivans dreaming of their villages
all the Marias dreaming of their walled cities,
picking up fragments of New World slowly,
not knowing how to put them together nor how to join
image with image, now I know how it was with you, an old map
made long before I was born shows ancient
rights of way where I walked when I was ten burning with desire
for the world's great splendors, a child who traced voyages
indelibly all over the atlas, who now in a far country
remembers the first river, the first
field, bricks and lumber dumped in it ready for building,
that new smell, and remembers
the walls of the garden, the first light.

Labels: Anne Dewey, Denise Levertov, Eavan Boland, James Laughlin, New Directions, Paul Lacey
Newer Posts Older Posts Home
Subscribe to: Posts (Atom)
A poem (or more) will be offered by the hour or with the day and at the very least once a week. So stay on your webbed toes. The aim is to share good hearty-to-eat poetry. This is a birdhouse size file from the larger Longhouse which has been publishing from backwoods Vermont since 1971 books, hundreds of foldout booklets, postcards, sheafs, CD, landscape art, street readings, web publication, and notes left for the milkman. Established by Bob & Susan Arnold for your pleasure.
The poems, essays, films & photographs on this site are copyrighted and may not be reproduced without the author's go-ahead.
Write Bob or the Bookshop