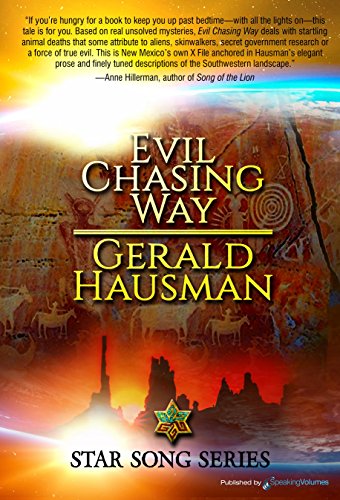 Set against the night country of New Mexico is a mystery that has never been solved. The novel follows the footsteps of a young reporter who has been assigned to witness a series of bizarre cattle mutilations. In his search for truth, he interviews tribal elders, scientists, FBI agents, state police, mediums, mystics, cattle and horse ranchers, and many other observers living in the high desert of northern New Mexico. One of his interviewees is a scientist who claims to have been taken aboard a “star car”. A Navajo medicine man confirms that he was abducted as well. A tribal friend tells the author: “There is a hole in the sky and things are coming out of it.” PRAISE FOR GERALD HAUSMAN “If you’re hungry for a book to keep you up past bedtime—with all the lights on—this tale is for you. Based on real unsolved mysteries, Evil Chasing Way deals with startling animal deaths that some attribute to aliens, skinwalkers, secret government research or a force of true evil. This is New Mexico’s own X File anchored in Hausman’s elegant prose and finely tuned descriptions of the Southwestern landscape.” —Anne Hillerman, author of Song of the Lion "Evil Chasing Way is something special. Part mystery, part magical realism, part personal journey, and very much mystical, I was irresistibly drawn into the story. I was captivated by the narrator, an inquisitive journalist seeking answers to the mysterious and often grotesque cattle and horse mutilations that once plagued southern Colorado and much of New Mexico. Experts raced from incident to incent, but credible explanations were few and far between. What happens when reality defies known science and rationality? That’s where Gerald Hausman begins. Then he draws deep from his well of knowledge of Navajo story and culture. (Think Tony Hillerman on steroids.) He takes you on a journey from the arroyos and high forests of the Sangre de Cristo Mountains to the craggy stone crevasses of the Grand Canyon. Along the way you meet shuffling skin walkers, extraterrestrials, and crafty coyotes. This is more than a novel. It’s an experience you won’t forget and it will leave you hungry for more."

—Peter Eichstaedt, author of Borderlands and The Dangerous Divide

Labels: Gerald Hausman, New Mexico, Speaking Volumes
Newer Posts Older Posts Home
Subscribe to: Posts (Atom)
A poem (or more) will be offered by the hour or with the day and at the very least once a week. So stay on your webbed toes. The aim is to share good hearty-to-eat poetry. This is a birdhouse size file from the larger Longhouse which has been publishing from backwoods Vermont since 1971 books, hundreds of foldout booklets, postcards, sheafs, CD, landscape art, street readings, web publication, and notes left for the milkman. Established by Bob & Susan Arnold for your pleasure.
The poems, essays, films & photographs on this site are copyrighted and may not be reproduced without the author's go-ahead.
Write Bob or the Bookshop