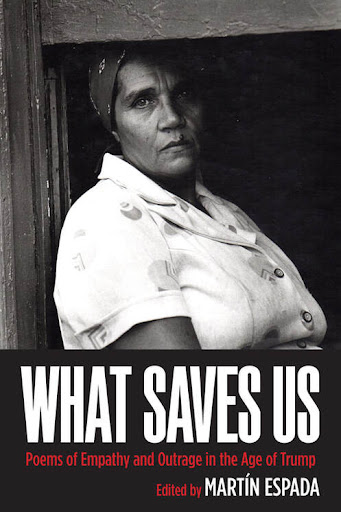 War comes to visit me once a day.

He's grown old and hates himself.

I stopped a quarter-century ago,

but he still drinks — sits in airport bars

and watches the cocky uniforms

line up at the departure gates.

He orders another double and snickers,

He stinks of corpse. I let him sleep in the garage.

You see, there's no way to make him leave.

Go to war just once, he's always with you.

an ice pick in his head, swears off the stuff.

By five he's back in the blood glow of the bar,

He's got an eye for boys and girls

with wallets full of combat pay.

roll them for their souls and go off giggling.

down the bar to slap him on the back:

teeth twinkling from the neon at the bar.

from What Saves Us

Labels: Doug Anderson, Martin Espada, poetry
Newer Posts Older Posts Home
Subscribe to: Posts (Atom)
A poem (or more) will be offered by the hour or with the day and at the very least once a week. So stay on your webbed toes. The aim is to share good hearty-to-eat poetry. This is a birdhouse size file from the larger Longhouse which has been publishing from backwoods Vermont since 1971 books, hundreds of foldout booklets, postcards, sheafs, CD, landscape art, street readings, web publication, and notes left for the milkman. Established by Bob & Susan Arnold for your pleasure.
The poems, essays, films & photographs on this site are copyrighted and may not be reproduced without the author's go-ahead.
Write Bob or the Bookshop