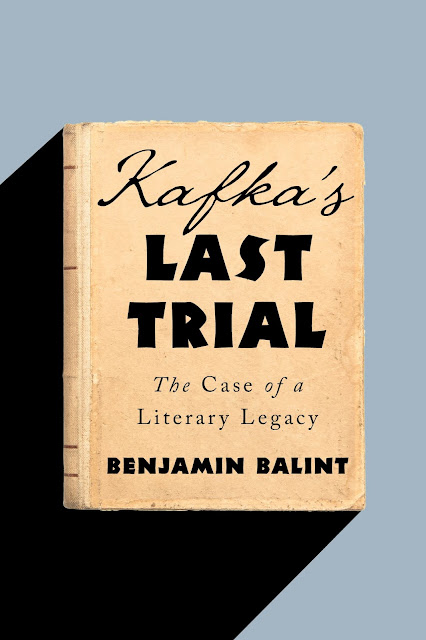 Cynthia Ozick's sharp-eyed view of the book
must be shared ~

“Though Benjamin Balint’s masterful hunt for Kafka’s rightful ownership begins as a local dispute in an Israeli family court, it soon thickens into modernity’s most bitterly contentious cultural conundrum. Who should inherit Franz Kafka? The woman into whose hands his manuscripts fortuitously fell? Germany, the nation that murdered his sisters but claims his spirit? Israel, asserting a sovereign yet intimate ancestral right? Searing questions of language, of personal bequest, of friendship, of biographical evidence, of national pride, of justice, of deceit and betrayal, even of metaphysical allegiance, burn through Balint’s scrupulous trackings of Kafka’s final standing before the law.” — Cynthia Ozick, author of Foreign Bodies

"The rise of Nazism put an end to the rich German-Jewish literary
symbiosis that had so decisively shaped both cultures, and to the long and lively Jewish love affair with the German language."

Labels: Benjamin Balint, Cynthia Ozick, Franz Kafka, Norton
Newer Posts Older Posts Home
Subscribe to: Posts (Atom)
A poem (or more) will be offered by the hour or with the day and at the very least once a week. So stay on your webbed toes. The aim is to share good hearty-to-eat poetry. This is a birdhouse size file from the larger Longhouse which has been publishing from backwoods Vermont since 1971 books, hundreds of foldout booklets, postcards, sheafs, CD, landscape art, street readings, web publication, and notes left for the milkman. Established by Bob & Susan Arnold for your pleasure.
The poems, essays, films & photographs on this site are copyrighted and may not be reproduced without the author's go-ahead.
Write Bob or the Bookshop