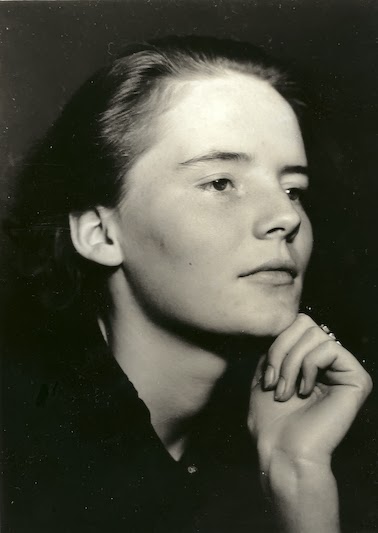 A west coast love story, done bohemian style, done in the era of Robinson Jeffers and done in his same town of Carmel, California.  48 year old photographer Edward Weston met his muse and future bride Charis Wilson, age 20,  and were, as they both said, instantaneously drawn to one another. They met in 1934, began to live together along that wondrous seacoast habitat, finally to marry in 1939 and were separated in 1945. Divorced 1946. And during those eleven years they sure did some things.

For one thing young Charis kept taking her clothes off, always a sunbather, freely, and Weston started to take photographs, 100s and 100s and many became legendary. There are an equal amount of fully clothed portraits of Charis as well. What Weston was capturing, and Charis was giving, was a freedom, a body light, a daring rarely seen.

A natural born storyteller (all part of the freedom) Charis Wilson Weston then wrote the grant application that earned for Weston a Guggenheim Fellowship — the first photographer to ever receive one — a $2,000 stipened that would take them 16,697 miles around western states in 187 days, and Charis did most of the driving, and would write the pioneer-keen-eyed text for their combined masterpiece from their journeys California and the West, published in 1940. The couple are still very much in love. It shows throughout the book. During this time Charis wrote the articles for photography magazines that were always credited to Weston.
You go girl.

When it all ended, native San Franciscan Charis Wilson already had a new husband planned. They were married immediately after her divorce. Two daughters were raised — one was later murdered in Scotland and the other remained close to her mother until Charis Wilson's passing in Santa Cruz, California at age 95 in 2009.

once in vermont films © bob arnold

Labels: Charis Weston, Edward Weston, Music Box, Once In Vermont Films (Weston), Robbie Basho
Newer Posts Older Posts Home
Subscribe to: Posts (Atom)
A poem (or more) will be offered by the hour or with the day and at the very least once a week. So stay on your webbed toes. The aim is to share good hearty-to-eat poetry. This is a birdhouse size file from the larger Longhouse which has been publishing from backwoods Vermont since 1971 books, hundreds of foldout booklets, postcards, sheafs, CD, landscape art, street readings, web publication, and notes left for the milkman. Established by Bob & Susan Arnold for your pleasure.
The poems, essays, films & photographs on this site are copyrighted and may not be reproduced without the author's go-ahead.
Write Bob or the Bookshop