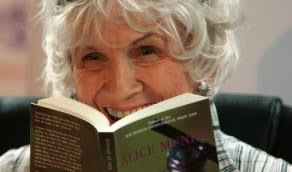 In 1963, the Munros moved to Victoria where they opened Munro's Books, a popular bookstore still in business. In 1966, their daughter Andrea was born. Alice and James Munro were divorced in 1972. She returned to Ontario to become Writer-in-Residence at the University of Western Ontario. In 1976 she married Gerald Fremlin, a geographer. The couple moved to a farm outside Clinton, Ontario, and later to a house in Clinton, where Fremlin died in April 2013."