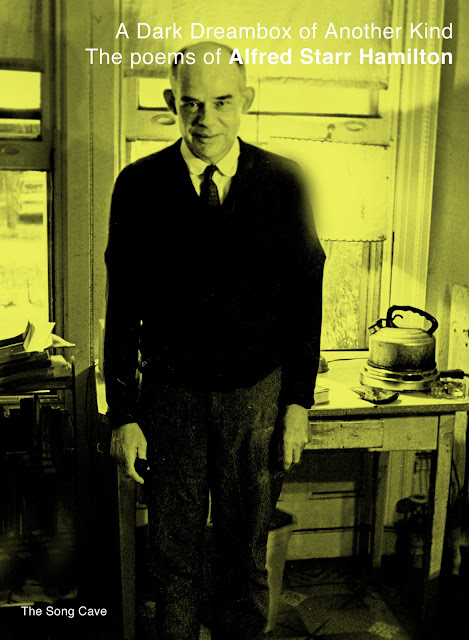 Once upon a time I received in the US Mail puffy and somewhat wrinkled envelopes from Alfred Starr Hamilton. Inside the envelopes were wads of poems, and outside on the envelope was always the same way his typed address in the left hand corner from "Montclair, N.J." I had to look up where that was on the map. I'm sure I chose and published at least one of the poems in this gorgeous new book by ASH — and if there is any book of poems published in the past few years risen out of the ashes — this one has to be it. As I'm sure Hamilton sent the same poems, most likely, over & over to the same publishers, and maybe his records were a little spotty as to whom took what. Just a guess. By the way, is there any poet who looked and wrote from and deserved such a name?

Those are the blossoms under the branches

That have been picked, but would have been left there

Those are the broken stars at the back of the wonderbrush

Tomorrow and next day, and all summer long

Those are the hushabye places as long as ever remembered

Still those are the timelier visions remembered

I never said goodbye to the broken places under the branches

That was all we were ever meant to be ourselves, Tomorrow

A Crust of Bread

why, I often wondered

why I was a poet,

most of all, I wanted

to have been a bird

if I could have been a bird

but I wanted the starlings

to have been fed,

I never played pool with all the rest

I was so oftentimes off by myself

I didn't know what it was

I didn't know where it was

It never left me alone

It spoke to me time and again

I stared at the pool

I stared at the beautiful face of mankind

And there it was at the bottom of the pool,

One of the clearest dreams I've ever witnessed

A little crawfish at the bottom of the pool,

A little crawfish on top of a sandy beach,

I could have that little thingamajig

yet I walked through the gay city of November

in search of the word for a snowflake

that stayed on a man's overcoat

for I searched the gray winds for none other answer

I lived at a crossroads of conclusions

that I lit an amber lamp alone in the parlorways

I thought of its hindsight

I thought of its foresight

I thought its eyes were everywhere

I thought it was a star gazing

I thought it was staring upwards

I thought of such dizzying heights

I thought this was upside down

I thought it was observing the underworld

I thought it was observing the wilderness

I thought the stars were on fire

I thought it was observing the moon

I thought it was funny

I thought the moon was for some pumpkin


But a snowflake stayed on one's lips

I talked to a golden jar of white roses

That stayed in the January parlor

To do anything for you

As light as the moon

To go over the green pastures

This is for the green leaves

This for the yellow leaves

This is for a little green and yellow schoolhouse

By the forsythia hillside

To tell you the truth

If I only could

I would like to build you a little Indian schoolhouse

I would like to send you a box of daffodils too

Considering the lilies of the valley

And neither do they spin nor do they toil

And send them back to school

I wonder if I lived

in a dark corner

until the only sun I ever saw

came around in the morning

I wonder if the sunlight

and little by little I was taught

never to tell a lie

I wonder how the light of day

Give us a clock

could you build this wonderful town house in the grass

and put a cricket in it by this evening?

When those are the walkative stars

That talked to the immediate prisoners themselves

When those are the talkative stars

That walked along the narrow sedge pathways

Yet those are lines to another star

That were to have been led for changelings

Around a dark dreambox of another kind

That houses our more talkative stars


Take me back to the days

of why I talked to the moon

Of the immoveable church

But the church was immoveable

But the church was your neighbor

Take me back to the days

Of an old walnetto song

That pinned the white blossoms over the blossom,

and pulled at the heart's strings of the world

That said your best heart

Is your neighbor of old

Even the sheep's woolen

Clung in the June distance

And I wanted the needle

That passed through the sheep's woolen

To have caught onto a thread

To a cloud that stayed in the sky 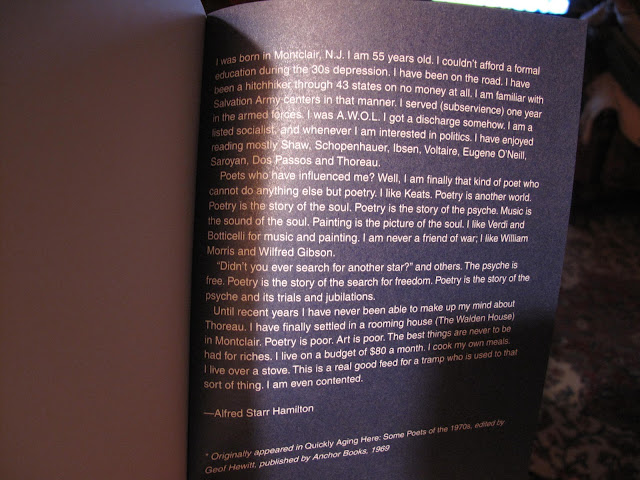