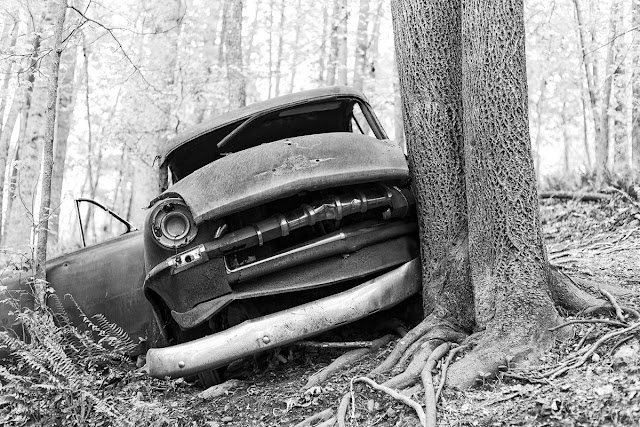 One of Native’s boys, the best looking one,

Smacked his car and hiked home with a

Bloody lip to get help from his father as

What to do. Native and I were working

At his farm together but stopped right off

And rode the tractor up the Jelly Mill woods

Road until we came out on the back road

Where the Ford was nose busted into the

Side of a concrete bridge. The boy had lost

Around and was stopped fast by the bridge.

We had to get it out of there before anyone

Reported and the state cops showed —

Besides, Native’s boy didn’t have a license.

Right and rolled it the two miles home

With all the other kids who showed up

Piling into the front and back seats

Having the time of their lives.

I knew Native for five years before Lily

Had his fire but when the trash pail flames

Let go in the Spring wind and spread in a

Dance over his dry fields it was his only

Neighbors he rushed to first because the

Fire department was ten miles off and Lily

Was a hippie without a phone. We didn’t

Have a phone either but used the one in

The Minister’s place and then called Native

Who brought his young boys and together

With rakes and shovels we slapped the fire

Back and made it perfect for the firemen to

Hose water, use walkie-talkies and take

All the credit. But before the big-shots got

There Native looked up from the smoking

Fields and nodded over to me that he well

Remembered doing this 30 years ago with

His uncle when the hill behind our place

Was quite a guy —

A ladies man with four sons.

A college professor who took one

Of his students for his second wife.

A twinkle to his eyes helped swing things

Since he only had one arm, lost as a boy,

But he insisted on manning a chain saw

Play the piano. Now that he has been dead

Ten years I wonder if he ever told me the truth,

Since he was too good to be true. A man whose

House site I cleared and then there were twenty piles

Of brush he wanted burned. I still have my denim

Winter coat that caught on fire by a hot spark.

The book he wrote on Thoreau.

The books I wrote because of Thoreau.

And somewhere in my hands that last time I was

Called over to help him out of his bed, body

Burned away from cancer, and bracing him up

In the bathroom so he could take a leak

We both got a look at one another in that

Labels: Bob Arnold, Longhouse, Vermont, Yokel
Newer Posts Older Posts Home
Subscribe to: Posts (Atom)
A poem (or more) will be offered by the hour or with the day and at the very least once a week. So stay on your webbed toes. The aim is to share good hearty-to-eat poetry. This is a birdhouse size file from the larger Longhouse which has been publishing from backwoods Vermont since 1971 books, hundreds of foldout booklets, postcards, sheafs, CD, landscape art, street readings, web publication, and notes left for the milkman. Established by Bob & Susan Arnold for your pleasure.
The poems, essays, films & photographs on this site are copyrighted and may not be reproduced without the author's go-ahead.
Write Bob or the Bookshop