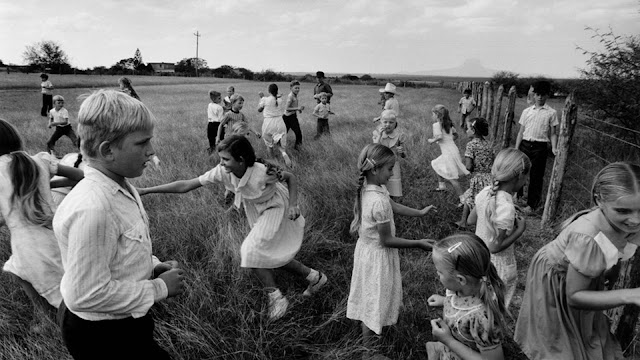 Something happens to them —

They get sullen, country kids.

Not city kids who become country,

But true hicks, who smell of cowshit,

Knew a ten year old girl who would visit

Us, braids of sunny hair, who at eighteen was

Hair cropped and sallow. No matter how

Hard I looked I couldn’t find that

Ten year old we would meet on the back road

As she hiked home from school, jumping

Puddles, smiling into our eyes, never

A schoolbook in her arms. Most others quit

School by sixteen, get married and wreck cars

Through their teenage years and can

Rebuild an engine blindfolded, but are

Looked upon as stupid. Slow.

Who torch a vacant barn for kicks

Then join the Army, who look at tan

Fence, who get married and love their

Moose, Bub, Wally, they stomp around.

Mothers that raised them live next door.

It really should be a simple rural life.

Most times it is, honest.

However, let me tell you about one

Secret meeting I went to once in a

With the best of apple cider served

By an open woodfire attended mostly

By men who had this great idea to

Save a local sawmill from any development

And the way proposed in whispers by these

Men with too much power elsewhere,

Was to arrange a midnight dumping

Of toxic barrels onto the property

And that should save our forest

River valley of any developers

Native, who was born in our house

And who couldn’t stand himself any

Longer that we were here and he wasn’t

But was a friend sort of anyway decided

One day to come visit with his tractor and

Put in a garden for us of potatoes right

Where he remembered his family once

Knew most of this land to be all potato

Fields and he sank into late Spring mud

And forgot the red oak trees were now

Fifty years older and taller and broader and

Not kind to sunlight where Native tilled

For a half hour getting nowhere but we

Let him do what he had to do

Labels: Bob Arnold, Longhouse, poetry, Vermont, Yokel
Newer Posts Older Posts Home
Subscribe to: Posts (Atom)
A poem (or more) will be offered by the hour or with the day and at the very least once a week. So stay on your webbed toes. The aim is to share good hearty-to-eat poetry. This is a birdhouse size file from the larger Longhouse which has been publishing from backwoods Vermont since 1971 books, hundreds of foldout booklets, postcards, sheafs, CD, landscape art, street readings, web publication, and notes left for the milkman. Established by Bob & Susan Arnold for your pleasure.
The poems, essays, films & photographs on this site are copyrighted and may not be reproduced without the author's go-ahead.
Write Bob or the Bookshop