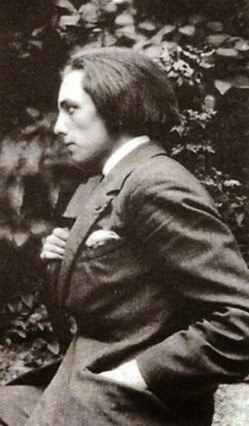 Roger Gilbert-Lecomte died on December 31, 1943 at age 36 in Paris from tetanus caused by a dirty needle. According to the poet  David Rattray, "A morphine addict, Lecomte had been jabbing the needle into a thigh muscle through a pair of dirty trousers."
Another source has stated experiments with carbon tetrachloride led Lecomte to a visionary poetic encounter (felt in the poems below) and an early death. He's gone. The poems are here.

To the North Wind

A burst heart empty of blood and woe
Caught in frozen air
At the stony edge of space
Sealed for eternity in the crystal icebox of the sky.

Holy Childhood
or
Concealment of Birth


I'll speak of the dark:China doll
Buried in the floor of a false forgetful forest
Where skeletons dressed as spiders dance
Lacework of dead leaves
I'll speak of the dark
To dank caves
Mushroom beds eyes glowing in the blackness
I'll speak of the dark to coiled snails
I'll speak of the dark
To rain to soot
To the circle of moonwater motionless at the bottom of a well
To barrels rolling in the cellar at midnight
When the white lady moaned
I'll speak of the dark
On the blind side of mirrors
I'll speak of the dark
Of immortal torture
Of most ancient despair
In the absence of a universe
And should a light shine
I'll speak of the light
I always see when falling asleep
That woman stretched
On the ground weeping
An admirable death's head
Veiled in black the murdered hope of childhood
An evil scowl flaps its wings
Next to the empty blood-soaked bed
The mother will have to hang
For the crime of a former life
Restored to its point of origin the stillborn child
Will never believe the lie of broad daylight
Black air never entered its lungs
Without making its nostrils quiver and its eyes
Widen at the horror of awakening
Having let go of life before even existing
It returns to the place it came from
By a thread linking its belly button to the top of the sky
To crystal fountains of wondrous emptiness