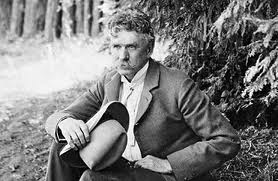 An Occurrence At the Styx River Ferry


I love the dead and their companionship is infinitely agreeable.   Ambrose Bierce


It was his asthma, we're told, that kept him on the gad, a livelong search for disembarrassed air. He'd quickly arrive and as quickly leave, as if the asylum he pursued had shut its doors and moved away. That's all he was up to, seeking a sanatorium to ease his spasms and quell his rale — that's what drew and drove him, they say, a place to free his bated breath. But they mistook the man: the goal of his long-drawn chase was death, and he dogged it all his life.


He coursed it as though it were a species game, studied its terrain, its ways and hours, its own particular prey, became a mine of old campaigns, till, a soldier rising twenty, he himself began to kill. In the Rebellion, he was cited fifteen times for the red badge he was thought to wear, and he rose to rank from meat to major — but it was only death that he sought, the bright and brass-buttoned Angel. He failed to find it at Corinth and Shiloh, failed again at Stone River, failed once more at Kenesaw, though there, with a Minie ball in his head, it came close to finding him.


The warning was writing on the wrong wall: he was still fighting when the war ended, and thereafter he fought with his quill through fifty years of peace. Into his printed stint, he wrote a duel a day for the papers and on a good day more, and he wore a pistol for the beasts he hated most, vicious dogs and men. He frequented graveyards, walked among the stones, and tombs, read the names of buried bones, but always death had been there before him, delivered its dead and gone — and then his son was killed in gunplay, and from there to the end, dirty cerements filled the dore skies.


He came at last to the river. The Rio Grande, it was called, but its name might've been the Chickamauga, which in Indian meant River of Death, it might've been the Acheron or known merely as the Black Water, so rank, no mephitic, that no cup, no can would hold it. Whichever it was, he reached its bank one day, and there, not far from crossing . . . .

American editorialist, journalist, short story writer, fabulist, and satirist — Ambrose Bierce wrote the short story "An Occurrence at Owl Creek Bridge" and compiled a satirical lexicon The Devil's Dictionary. He was born in Ohio and to this day no one knows where he ended his days. He was last seen traveling with rebel troops during the Mexican Revolution (1913).