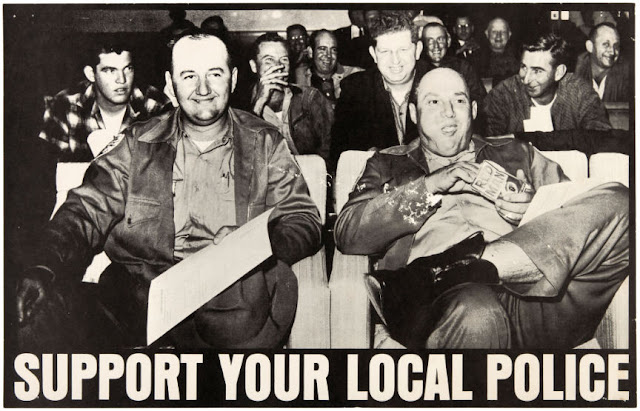 "Summer 1964. Hundreds of civil rights volunteers were in Mississippi for a voter registration drive, and three (two white men and a black) were in Neshoba County to investigate the burning of a black church that was to have been used as a base for registering blacks to vote. After briefly detained for speeding one night, the trio drove into the night and simply vanished.

Their bodies were later discovered, and their murder became a defining event of the civil rights era and the plot of the 1988 film ”Mississippi Burning.” The main suspect were the local sheriff, Lawrence A. Rainey (above right), his deputy Cecil Price (above left) and 16 other men, all of whom were allegedly members of the Ku Klux Klan. They were charged with violating the civil rights of the victims.

Sheriff Rainey and seven other men were acquitted. Deputy Price and six other defendants were convicted. The jury could not decide on the remaining defendants. A Klan leader and one other defendant got the stiffest sentences, 10 years in prison. Mr. Price, whom investigators suspected of delivering the victims to their killers, got a six-year term and served four and a half years.

During the trial, LIFE magazine devoted two pages to the above photo made by Paul Reed, which showed defendants hollering and mocking the court. Rainey was seen flamboyantly chewing his tobacco in the picture. Public outcry followed, and when his term as sheriff ended in 1967, Rainey was unable to find further work in law enforcement. He ended his life working as a security guard at supermarkets and malls, and blaming the FBI for preventing him from finding and keeping jobs."

I was gifted this poster, now rare in its

original format, almost 60 years ago by

my older sister when it was re-produced

from Life Magazine into the sway of the

counterculture, and today the same photograph

is haunting its way back in the wake of

in the Black Lives Matter movement,

and the resurgence of white supremacist

does not spell life on this earth together,

except we are together. One planet.

I'm hardly against cops — I have warm and

responsible relatives who have been cops and

others who are still cops, but there are bad

A good cop, with the power, would have

already arrested a criminal president and any

of his associates. No matter who they are.

You face them and call it out, with care.

and silverfish so that on New Year's Day

2021 I finally planted the poster onto a

wide pine board and built a frame around

Labels: Civil Rights Movement, Ku Klux Klan, Mississippi (1964)
Newer Posts Older Posts Home
Subscribe to: Posts (Atom)
A poem (or more) will be offered by the hour or with the day and at the very least once a week. So stay on your webbed toes. The aim is to share good hearty-to-eat poetry. This is a birdhouse size file from the larger Longhouse which has been publishing from backwoods Vermont since 1971 books, hundreds of foldout booklets, postcards, sheafs, CD, landscape art, street readings, web publication, and notes left for the milkman. Established by Bob & Susan Arnold for your pleasure.
The poems, essays, films & photographs on this site are copyrighted and may not be reproduced without the author's go-ahead.
Write Bob or the Bookshop