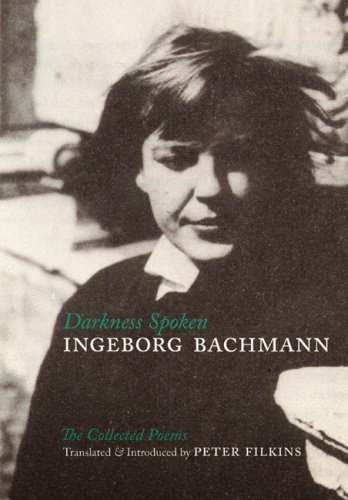 What then will remain?
I sigh, suffer, search,
and my wanderings
will never end.
The dark shadow
which I have followed from the start
leads me into the deep loneliness of winter.
There I stand still.
The frost coats my hair
and the cold burns through my limbs.
Melodies of dead silence play a dance,
endlessly turning round each other.
Blue spirits leap into the room —
the departed who wandered off before me
desiring, like lords, an ancient right.
Now they will be paid with blossoms
which many summers saw
and which break and fall this winter.
The trees exude the cold from within,
and tears, which the moonlight draws out,
hangs as thin cones coated in ice.
Over there, above the glacier,
the long departed pour out their blood,
and so I follow their example and do the same to them.
I listen close to the centuries,
though I don't want to be swallowed up by them.
Into the shadow which wants to stretch this far
I try to press a vestige of myself,
despite the idle fear of wasting my leaf.

The shelves sag.
The volumes are weighted down with the past.
Their sweat is dust.
Their impulse is rigidity.
They no longer struggle.
They have saved themselves
upon the island of knowledge.
Sometimes they've lost their conscience.
Here and there, protruding
from them, human fingers
point directly towards life
or towards heaven.

I'm still afraid to snare you with my breath,
drape you with blue banners of the dream,
or outside the misty door of my darkened castle,
burn torches, such that you'd find me . . .

I'm still afraid to free you from shimmering days,
from the golden river bed of time's own river of sun,
fearing my heart would burst silvery above the moon's
own terrible countenance.

Look up and don't look at me!
The banners are sinking, the torches have been extinguished,
the moon follows the course it traces.
It's time you came to seize me, holy madness!

I Know of No Better World

Who knows of a better world should step forward.
Alone, no longer out of bravery, not wiping away this saliva,
this saliva worn upon the cheek
as if to a coronation, as if redeemed, whether at communion
or among comrades. The weak rabbit,
the rat, and those fallen there, all of them,
no longer alone, but as one, though still afraid,
the dream of returning home
in the dream of armament, in the dream
of returning home.

Wasteland, but only to the eye

Darkness Spoken, with a foreword by Charles Simic, gathers together Ingeborg Bachmann’s two celebrated books of poetry Borrowed Time and Invocation of the Great Bear, as well as early and late poems not collected in book form, over 100 of them appearing in English for the first time, as well as 25 poems never before published in German. Bachmann is considered one of the most important poets to emerge in postwar German letters, and this volume represents the largest collection available in English translation. Influencing numerous writers from Thomas Bernhard to Christa Wolf to Elfriede Jelinek (winner of the 2004 Nobel Prize in Literature), Bachmann’s poetic investigation into the nature and limits of language in the face of historical violence remains unmatched in its ability to combine philosophical insight with haunting lyricism.

Bachmann was born, the eldest of three children, in 1926 in Klagenfurt, Austria. She studied philosophy at the universities of Innsbruck, Graz, and Vienna. In 1953 she received the poetry prize from Gruppe 47 for her first volume, Borrowed Time (Die gestundete Zeit). Her second collection, Invocation of the Great Bear (Anrufung des großen Bären), appeared in 1956. Her various awards include the Georg Büchner Prize, the Berlin Critics Prize, the Bremen Award, and the Austrian State Prize for Literature. Writing and publishing essays, opera libretti, short stories, and novels as well, she divided her time between Munich, Zurich, Berlin, and Rome, where she died in 1973 from a fire in her apartment caused by her falling asleep in bed while smoking a cigarette  — she awoke to find herself surrounded in flames. Horribly burned at age forty seven the poet was gone to us three weeks later.

The translator, Peter Filkins has published two volumes of poetry, What She Knew (1998) and After Homer (2002), and has translated Bachmann’s The Book of Franza and Requiem for Fanny Goldmann. He is the recipient of an Outstanding Translation Award from the American Literary Translators Association and the Berlin Prize from the American Academy in Berlin. He teaches at Simon’s Rock College of Bard in Great Barrington, Massachusetts.

Labels: Charles Simic, Ingeborg Bachmann, Peter Filkins
Newer Posts Older Posts Home
Subscribe to: Posts (Atom)
A poem (or more) will be offered by the hour or with the day and at the very least once a week. So stay on your webbed toes. The aim is to share good hearty-to-eat poetry. This is a birdhouse size file from the larger Longhouse which has been publishing from backwoods Vermont since 1971 books, hundreds of foldout booklets, postcards, sheafs, CD, landscape art, street readings, web publication, and notes left for the milkman. Established by Bob & Susan Arnold for your pleasure.
The poems, essays, films & photographs on this site are copyrighted and may not be reproduced without the author's go-ahead.
Write Bob or the Bookshop