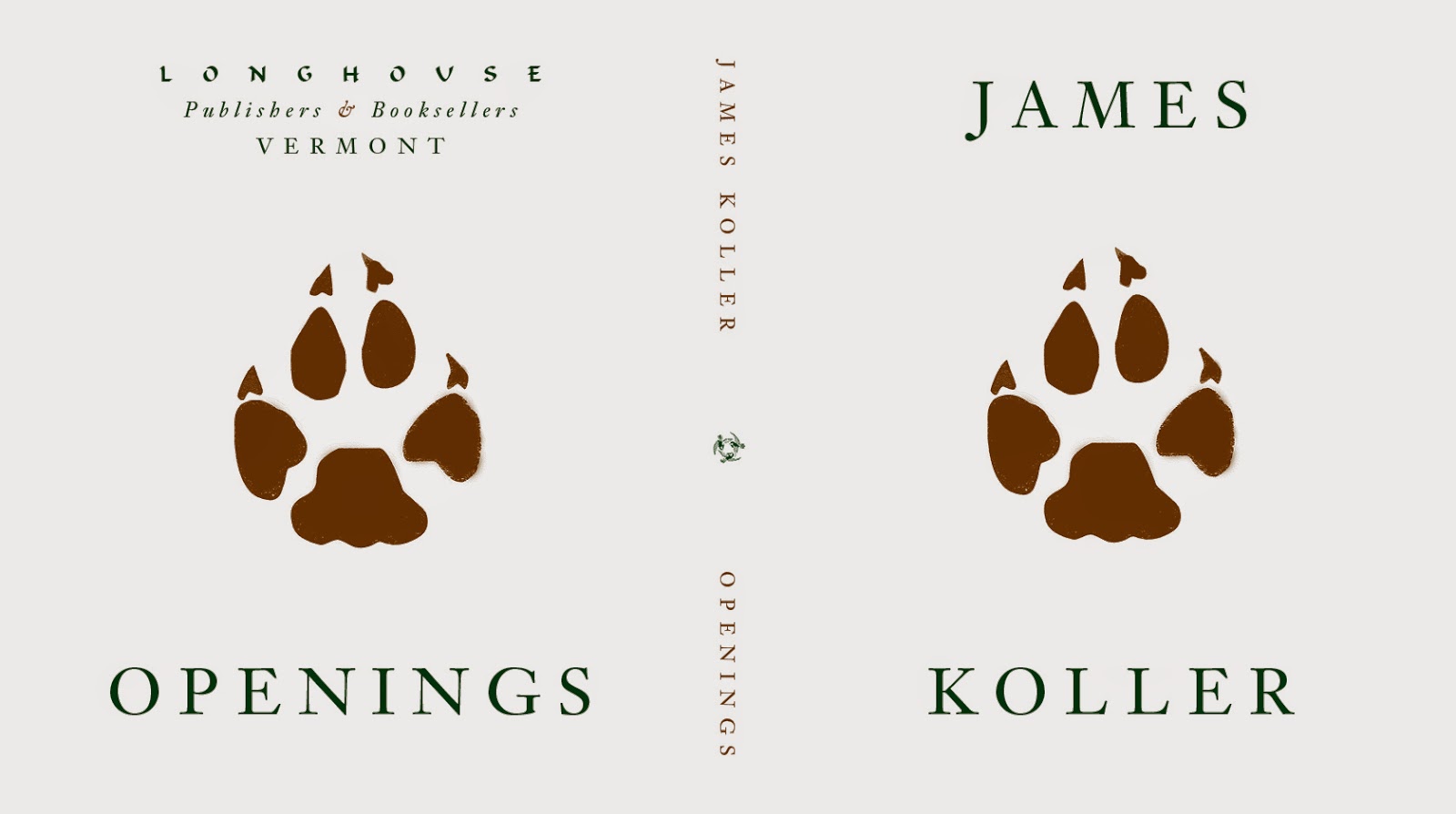 New and available now from Longhouse ~

all orders may be made by Paypal, credit card or check ~
mail order here:

I take my time.

I look it all over —

the fencerow, the timber’s edge.

I look it all over

JAMES KOLLER was born 30 May 1936 to Elsie Clark and James Koller in Oak Park, Illinois. He has a sister Joan (Perkins). Koller’s father was a union photoengraver for the Chicago Daily News. Once between cross-country trains in Chicago, years later, Susan and I met up with Jim and he took us on a brisk walking-tour of downtown Chicago showing us where his father worked and where Jim once worked as a young house painter and day laborer. In 1948 at the age of twelve Koller took his first trip west with his family into Wyoming, Texas and Missouri where his father had lived for a few years before WWI. His father’s stepfather had lived out his life alone in Missouri. The trip put everlasting pictures into Koller’s head for years to come. He had traveled out to California in 1952 with relatives but in 1956 he took his first trip alone westward and for the next sixty years he traveled extensively throughout the west, crossing the country by car or truck more than anyone could even begin to imagine. He kept moving, and he would do the same twenty years later in Europe. Making friends along the way, and oh so many marriages, loves, children and grandchildren. During the 1956 trip he visited City Lights Bookstore for the first time and the city of San Francisco where he remembers it didn’t then “connect” with him, but it soon would. Over the years he would establish himself with homes and families in Illinois, Washington, California, New Mexico and for the last half of his life in Maine. The sojourns to Europe were also home to Koller. Some of the hallmark stories from Jim would include starting up with Coyote’s Journal in 1964. Editing and publishing the masterpiece On Bear’s Head by Philip Whalen, where he got himself hoodwinked by his co-publisher Harcourt. Meeting Franco Beltrametti’s ship coming to port from Japan in San Francisco, and he would do the same for Philip Whalen when he returned, and a few years later for Gary Snyder’s voyage home, all of this in the late 60s and often helping everyone take their belongings here & there. During his San Francisco time he drove friend Richard Brautigan around because Koller loves to drive and Brautigan doesn’t. Important pals from the time-he-met-them-until-the-day-he-died off his lips would be those already mentioned, plus: Bill Brown, Zoe Brown, Jack Boyce, Joanne Kyger, Peter Coyote, Thomas Thomas, Karl Bruder, Drummond Hadley, Patsy Zoline, Bill Deemer, Michael Fine, Bobby Byrd, Nanao Sakaki, Gary Lawless, Paul Kahn, Stefan Hyner, Giuseppe Moretti, Peter Garland, and shorter stints with poets Lew Welch, Paul Blackburn and Robert Creeley sunk their teeth into him. He had busted marriages and spread out families and every single family member seemed to love him. Including nine grandchildren and a great-grandson. He loved his parents and the family his parents loved. He was last seen in late November leaving family in Illinois, naturally heading west, this time with his oldest son Jedediah. They got themselves in Jim’s  small Ford car over the Mississippi River and into Missouri, home once to his father and other family, and in a Motel 6 in Joplin, room 124, my goodness under the aura of Route 66, in the town where Langston Hughes was born —  poetry & the blues — James Koller was struck down by a massive stroke and would pass some weeks later with his family in his circle. It was 10 December 2014. Some of us have never known the world without James Koller.

Labels: Bob Arnold, James Koller (Openings), Longhouse, Selected Poems
Newer Posts Older Posts Home
Subscribe to: Posts (Atom)
A poem (or more) will be offered by the hour or with the day and at the very least once a week. So stay on your webbed toes. The aim is to share good hearty-to-eat poetry. This is a birdhouse size file from the larger Longhouse which has been publishing from backwoods Vermont since 1971 books, hundreds of foldout booklets, postcards, sheafs, CD, landscape art, street readings, web publication, and notes left for the milkman. Established by Bob & Susan Arnold for your pleasure.
The poems, essays, films & photographs on this site are copyrighted and may not be reproduced without the author's go-ahead.
Write Bob or the Bookshop