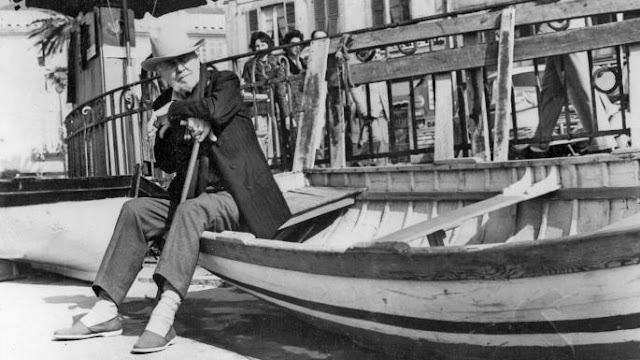 Ezra Pound on the seafront in Rapallo, Italy, in 1958, shortly after being released from an American asylum 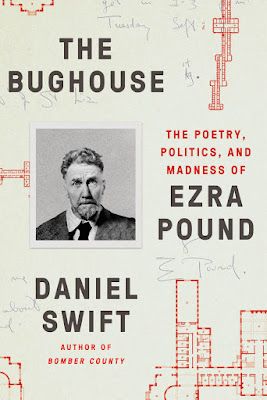 A sensitive investigation into the enigmatic, prodigious mind of poet Ezra Pound (1885-1972).
From 1945 to 1958, Pound was incarcerated at St. Elizabeths Hospital for the Criminally Insane, a federal asylum in Washington, D.C. Although sequestered from the outside world, he was hardly isolated: among his many visitors were “tourists, young activists, ambassadors and academics,” and prominent and aspiring poets: among them, Robert Lowell, Marianne Moore, Charles Olson, Allen Tate, William Carlos Williams, John Berryman, Randall Jarrell, and Archibald MacLeish. Except for T.S. Eliot, who had won the Nobel Prize in literature, many of his visitors were at the early stages of their careers, and they sought Pound’s encouragement or advice. “Visiting Pound became a social event and a literary moment,” writes Swift (English/New Coll. of the Humanities, London; Shakespeare’s Common Prayers: The Book of Common Prayer and the Elizabethan Age, 2012, etc.), who draws on memoirs of these visits as well as interviews, a close reading of Pound’s writings, and medical records to create a multidimensional portrait of a celebrated, controversial literary figure. Pound was declared insane after being charged with treason for fascist, racist, anti-Semitic, and anti-American radio broadcasts that he made in Mussolini’s Italy during World War II. The insanity defense exempted him from the death penalty, but it has confounded biographers and literary critics, who have struggled to reconcile his creative works with his politics and purported mental state. During his incarceration, Pound produced much new work, leading the U.S. attorney, in 1954, to ask Pound’s physician why a man “who seemingly is mentally capable of translating and publishing poetry…allegedly is not mentally capable of being brought to justice.” Was he insane, many wondered, or was he “a coward and a cheat” who contrived the defense to save himself? Rather than trying to resolve those questions, Swift takes a prismatic view, allowing “rival tellings to sing their discord.” The treason indictment was dismissed in 1958 after “a chorus of pleas from cultural celebrities,” and Pound left the U.S. for Italy.
A shrewd, circumspect literary biography.

Labels: Daniel Swift, Ezra Pound, St. Elizabeths Hospital
Newer Posts Older Posts Home
Subscribe to: Posts (Atom)
A poem (or more) will be offered by the hour or with the day and at the very least once a week. So stay on your webbed toes. The aim is to share good hearty-to-eat poetry. This is a birdhouse size file from the larger Longhouse which has been publishing from backwoods Vermont since 1971 books, hundreds of foldout booklets, postcards, sheafs, CD, landscape art, street readings, web publication, and notes left for the milkman. Established by Bob & Susan Arnold for your pleasure.
The poems, essays, films & photographs on this site are copyrighted and may not be reproduced without the author's go-ahead.
Write Bob or the Bookshop