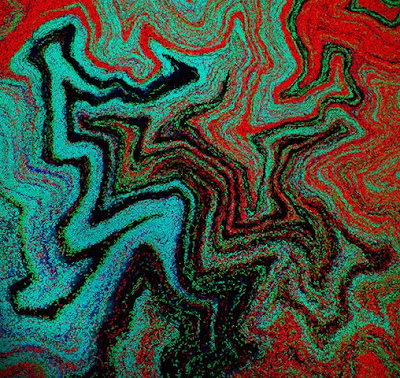 Bacteria biofilm
Fernan Federici, Tim Rudge, PJ Steiner and Jim Haseloff
Scale: *******
This is Bacillus subtilis, a rod-shaped bacterium commonly found in soil. Distinct lineages of bacteria expressing different fluorescent proteins were initially mixed randomly on a petri dish. As bacteria grow, they organise themselves into reproducible patterns and shapes that can be predicted with mathematical models. The researchers took this image as part of a project designing artificial genetic circuits for pattern formation in bacterial colonies and plant tissuesPhotograph: Wellcome Images