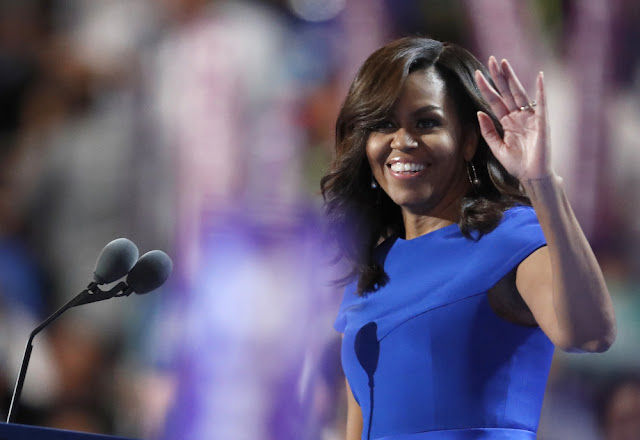 I was actually turned on by Michelle Obama’s walk to the podium and her frisky look at her arrival. The hair and almost peek-a-boo was just right. Her mouth is enticing. It wasn't so much I was turned on as I felt a turn-on in the air and I was thrilled to know after eight years in the White House and dealing with literal pigs, she hasn’t lost her girlie ways, and she would call them girlie ways. And I was happy for Barack Obama that he had a partner this restoring and intelligent. She had the best speech of the night. I’m sorry but I find Elizabeth Warren what Donald Trump calls  “goofy” and in fact a little drippy, but also quick and sparky but all in bureaucratic motions. Cory Booker I am impressed by, have been for years, but he was forcing a civil rights speech down our throats and we have heard many many better. Bernie was okay. A lovely standing ovation for a very long time, but not as long as I remember chilled to the bone hearing Bobby Kennedy get at another convention once upon a time. I believe the audience cheered RFK for eleven minutes.

Debbie Wasserman Shultz can’t leave soon enough, she’s a pest, as was Howard Dean in the same DNC role. They are crooks who do rig the system. Hillary, if elected won’t change much at all. Of course she will have none of the gravitas of Obama, nor his patience and reserve in the right places. Trump has a very good chance of getting in. Many people will never admit to voting for him but there is a perverse nature to Americans brought up on entertainment and shlock. It’s been here now since we were teenagers. Instead of Trump I’d like to see the Republicans elect someone like Ike — an elder stationed male (or female) who knows the system and knows how it works. We have to see this country work right again, although I believe the people are mainly warped and tangled. The worker force is gone, kaput. Certainly we can find dozens who still work well but the machinery is corrupt and prejudiced and no gears work with that in the way. While you were having chocolates during the Dem convention so was I! And a few trail mix handfuls and I was paging slowly through this magnificent Blake book detailing his exodus with Dante (and Virgil). I went through all the book in three hours. I slept a little rocky myself and it may have been the warm night. 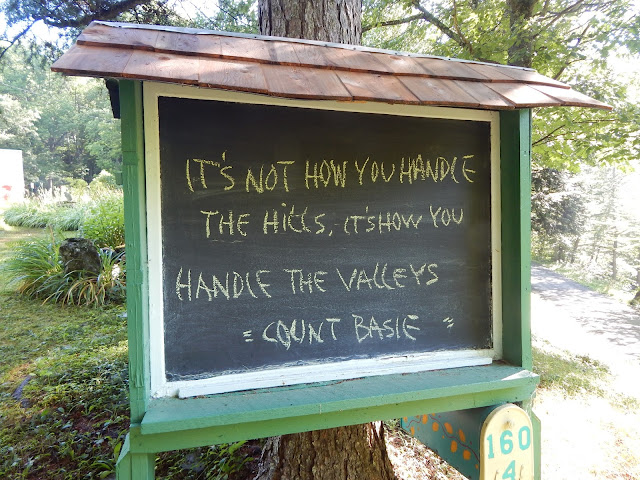 Labels: Count Basie, Frank Sinatra, Music Box
Newer Posts Older Posts Home
Subscribe to: Posts (Atom)
A poem (or more) will be offered by the hour or with the day and at the very least once a week. So stay on your webbed toes. The aim is to share good hearty-to-eat poetry. This is a birdhouse size file from the larger Longhouse which has been publishing from backwoods Vermont since 1971 books, hundreds of foldout booklets, postcards, sheafs, CD, landscape art, street readings, web publication, and notes left for the milkman. Established by Bob & Susan Arnold for your pleasure.
The poems, essays, films & photographs on this site are copyrighted and may not be reproduced without the author's go-ahead.
Write Bob or the Bookshop