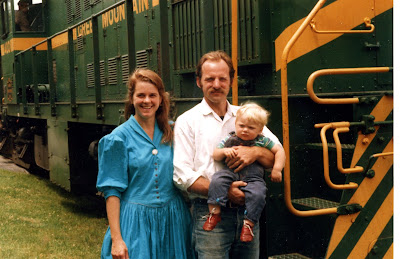 Young family Susan, Bob & Carson dudded up once upon a time for a train ride. 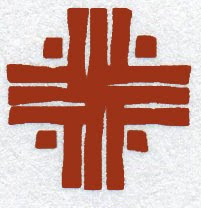 A friend today goes to the railyards and keeps time with
the local town train as he did as a kid. Looks like a kid
when he talks about the trains, photographs he has
taken up in the hill-towns of the zoom surprise train
and its engine lamp appearing out of tunnels. He can
tell you if anything is different, a split second is off
schedule, and when looking at a newspaper photo-
graph of a wreck just yesterday at a Florida grade
crossing — a venue of big truck stuck on the tracks,
state police flagging madness, dispatch calls and sud-
denly everything is out of whack because they said the
train wasn't due but here comes trouble around the
bend blaring a horn that you better watch out and
seventy people will be hurt — my friend can point
into the accident stew and pick out one engine,
the truck body dragged three hundred yards, keeled over
baggage car, tilted sleeping coach, upright one-foot-
on-one-foot-off dining car and back at the RR crossing
the rest of the train in civil shape wondering: what in
the hell happened up ahead? My friend clips out
these photographs, fills a scrapbook. He and his wife
enjoy their train journeys in America, but more often
than not they now fly out and train home, or fly to
someplace with a train somewhere in the itinerary.
There are short train trips everywhere. We have taken
a few in Vermont, Massachusetts, New York State and
Colorado; the latter aboard the Durango and
Silverton Narrow-Gauge, when late October snow was
already steep across the mountains. You travel beside
the Animas River trickling as we go as easily this
tourist train, but nicely stuffed together out in the
open cars, bundled for the weather: teenagers, locals,
Europeans gasping and all of us red face weather
feeling magnificent as the train hairpins on cliffs
while negotiating a canyon passage. To think this goes
on every day for about half a year. I wonder if the
mountain blonde hair, braided, young woman who
appeared lesser dressed from one of the indoor coach
seats, to maybe join us wackos out here for a mo-
ment for the startling real view — is she part of the
train? — she wore a long dress that I have no memory
of because of two buttons plucked open at her neck
and an obvious pet iguana hugged her right there.
She told a few of us she had to go back inside because
the iguana was shivering. You just have to believe
how beautiful she was, and how normal this is, at least
at one time, in the mountain west. Going back inside
she missed entirely a forty-five mile journey reeking
of belched smoke and cinders from the time-worn
steam train painted classical black added to a model
of coaches laced in yellow trim over a forest green
splendid as the forests we coil through. You can take
a highway from Durango and meet your party on the
train in Silverton if you want to, or ride inside the
coaches if you like, but if I had a choice I'd want to
be outdoors on this canopy carriage stinking of rail-
road muss brightening your lungs looking down into
the Animas River, shortened from its original "Rio de
Las Animas Perdidas" — A River of Lost Souls — and
christ, aren't we! stepping down feeling rail-weary
onto the dirt streets of Silverton, ever mining town
jagged of agates along the gravel bars, so high up in
San Juan County there isn't one acre of farmland
anywhere to be found. We're so high up that when
Susan tries on a ring found in one of the nests of curio
shops, it won't budge. The amused silversmith
declares her fingers have thickened with the altitude
— buy it and it will fit better in Durango, and it did.
But get away from those shops, they are every-
where you go and how easily just to walk around the
back-skirts of Silverton: dog barks in one alley boarded up
fence high for privacy from neighbors and gawkers
and upwards the blue sky is everywhere. We found
the town library and we think there is a grade school
behind it by the swings and a playground scuffed out,
near a mountain side dropping to its back door with
a Christ figure up there — not too tall, both hands
palm open and appearing to look at anyone who looks
at him — but turning around we see he really looks
down into and blessing over the canyon trail. The
silver miners went into and came back home on this
trail. Today it is a sightseers' promenade over a skinny
old rail bed, but still a canyon. Where eagle flies,
snow blows, water flows, and so can you if you let it.
Now ten years later I talk with my friend about the
narrow gauge, a train he also rode and since four
hundred passengers can fit on the train just imagine
how many may join this thought — because you see,
and don't ask me why — the descent is just as
expressive and commanding as the ascent. A good
train ride always gets you coming and going.