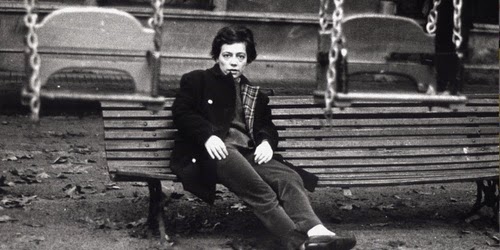 IN A COPY OF LES CHANTS DE MALDOROR

A field of flowers stung beneath my dress, giddy as children at
midnight.

A gust of light in my bones when I write the word earth. A word or
presence, followed by perfumed animals — as sad as itself, as beautiful
as suicide — and it soars over me like a dynasty of suns.

Everything is making love to the silence.

They had promised me a silence like fire — a house of silence.

Suddenly, the temple is a circus and the light is a drum.

The body remembers love like the lighting of a lamp.

If silence is temptation and promise.

FROM THE OTHER SIDE

Like sand sifting through an hourglass, so music falls into music.

I am sad on this night made of wolf fangs.

A single thought cast out words like lifelines at sea. Making love
inside our embrace implied a black light: a darkness that started
gleaming. A rediscovered light, twice extingusihed already, yet more
vibrant than a thousand suns. The color of a mausoleum for infants,
the deadened hues of repressed desire, opened up in the savage
room. The rhythm of our bodies disguised the flight of the ravens.
The rhythm of our bodies carved out a space of light inside that light.

from The Shapes of Absence

THE WORD THAT HEALS

While waiting for a world to be unearthed by language, someone
is singing about the place where silence is formed. Later it'll be
shown that just because it displays its fury doesn't mean the sea — or
the world — exists. In the same way, each word says what it says —
and beyond that, something more and something else.

Before words can run out, something in the heart must die.

The light  of language covers me like music, like a picture ripped
to shreds by the dogs of grief. And winter reaches for me like a woman
who has fallen in love with a wall.

Just when I'd hoped to give up hoping, your fall takes place within
me. Now I am only but this within.

Listening to the sounds of falling water in my dream. The words
fall like the water — I fall. Drawing the shape of my eyes in my eyes;
swimming in my waters and telling myself of my silences. All night
long, waiting for language to configure me, I am thinking of the
wind that whirls toward me and stays in me. All night long, I have
been walking in an anonymous rain. I was given a silence filled with
shapes and apparitions (you say). And you keep running, an unconsoled
as a bird alone in the wind.

GESTURE FOR AN OBJECT

Numb time, time like a glove upon a drum.

The three who compete in me remain on a shifting point and we
neither are nor is.

My eyes used to find rest in humiliated, forsaken things. Nowadays
I see with them; I've seen and approved of nothing.

THE MASK AND THE POEM

The splendid paper palace of the wanderings of childhood.

When the sun sets, they will lock up the tightrope-walker in a cage
and take her to the temple ruins and leave her there.

to sing sweet and die soon.
no:
to bark.

like Rousseau's sleeping gypsy:
this is how you sing, plus the lessons in terror.

you have to cry until you break
in order to make or utter a small song,
to scream so much to fill the holes of absence
that's what you did, what I did.
I wonder if that didn't make the error worse.

you did well to die.
that's why I speak to you,
why I confide in a girl monster.

Labels: Alejandra Pizarnik, New Directions, Yvette Siegert
Newer Posts Older Posts Home
Subscribe to: Posts (Atom)
A poem (or more) will be offered by the hour or with the day and at the very least once a week. So stay on your webbed toes. The aim is to share good hearty-to-eat poetry. This is a birdhouse size file from the larger Longhouse which has been publishing from backwoods Vermont since 1971 books, hundreds of foldout booklets, postcards, sheafs, CD, landscape art, street readings, web publication, and notes left for the milkman. Established by Bob & Susan Arnold for your pleasure.
The poems, essays, films & photographs on this site are copyrighted and may not be reproduced without the author's go-ahead.
Write Bob or the Bookshop