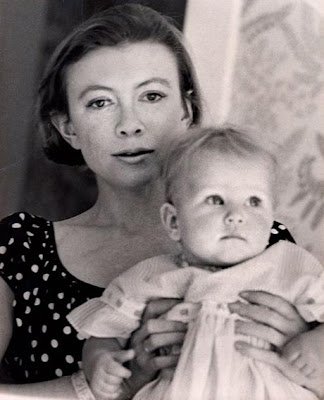 
She was born in the first hour of the third day of March, 1966, at St. John’s Hospital in Santa Monica. We were told that we could adopt her late the afternoon of the same day, March third, when Blake Watson, the obstetrician who delivered her, called the house at Portuguese Bend in which we then lived, forty-some miles down the coast from Santa Monica. I was taking a shower and burst into tears when John came into the bathroom to report what Blake Watson had said. “I have a beautiful baby girl at St. John’s,” is what he had said. “I need to know if you want her.” The baby’s mother, he had said, was from Tucson. She had been staying with relatives in California for the birth of the baby. An hour later we stood outside the window of the nursery at St. John’s looking at an infant with fierce dark hair and rosebud features. The beads on her wrist spelled out not her name but “N.I.,” for “No Information,” which was the hospital’s response to any questions that might be asked about a baby being placed for adoption. One of the nurses had tied a pink ribbon in the fierce dark hair. “Not that baby,” John would repeat to her again and again in the years that followed, reenacting the nursery scene, the recommended “choice” narrative, the moment when, of all the babies in the nursery, we picked her. “Not that baby . . . that baby. The baby with the ribbon.”

“Do that baby,” she would repeat in return, a gift to us, an endorsement of our wisdom in opting to follow the recommended choice narrative. The choice narrative is no longer universally favored by professionals of child care, but it was in 1966. “Do it again. Do the baby with the ribbon.”

And later: “Do the part about Dr. Watson calling.” Blake Watson was already a folk figure in this recital.

And then: “Tell the part about the shower.”

Even the shower had become part of the recommended choice narrative.

After we left St. John’s that night we stopped in Beverly Hills to tell John’s brother Nick and his wife, Lenny. Lenny offered to meet me at Saks in the morning to buy a layette. She was taking ice from a crystal bucket, making celebratory drinks. Making celebratory drinks was what we did in our family to mark any unusual, or for that matter any usual, occasion. In retrospect we all drank more than we needed to drink but this did not occur to any of us in 1966. Only when I read my fiction, in which someone was always downstairs making a drink and singing “Big Noise blew in from Winnetka,” did I realize how much we all drank and how little thought we gave to it. Lenny added more ice to my glass and took the crystal bucket to the kitchen for a refill. “Saks because if you spend eighty dollars they throw in the bassinet,” she added as she went.

I took the glass and put it down.

I had not considered the need for a bassinet.

I had not considered the need for a layette.

The baby with the fierce dark hair stayed that night and the next two in the nursery at St. John's and at some point during each of those nights I woke in the house at Portuguese Bend to the same chill, hearing the surf break on the rocks below, dreaming that I had forgotten her, left her asleep in a drawer, gone into town for dinner or a movie and made no provision for the infant who could even then be waking alone and hungry in the drawer in Portuguese Bend.

Dreaming in other words that I had failed.

Been given a baby and failed to keep her safe.

When we think about adopting a child, or for that matter about having a child at all, we stress the “blessing” aspect.

We omit the instant of the sudden chill, the “wait-if,” the free fall into certain failure.

And worse yet, worse by far, so much worse as to be unthinkable, except I did think it, everyone who has ever waited to bring a baby home thinks it: what if I fail to love this baby?