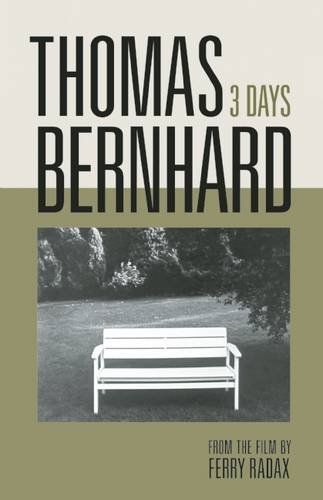 Over the course of three days, June 5, 6, and 7 in
1970, simply sitting on a white bench in Hamburg
park, Thomas Bernhard delivered a powerful
monologue for Three Days (Drei Tage), filmmaker
Ferry Radax's commanding film portrait of the great
Austrian writer. Radar interwove the monologue
with a variety of metaphorically resonant visual
techniques — blacking out the screen to total
darkness, suggesting the closing of the observing
eye; cuts to scenes of cameramen, lighting and
recording equipment; extreme camera distance and
extreme close-up. Bernhard had not yet written his
autobiographical work Gathering Evidence, published
originally in five separate volumes between 1975
and 1982, and his childhood remembrances were a
revelation. This publication of Bernhard's monologue
and stills from Radax's artful film allows this unique
portrait of Bernhard to be savored in book form.

Labels: Ferry Radax, Thomas Bernhard
Newer Posts Older Posts Home
Subscribe to: Posts (Atom)
A poem (or more) will be offered by the hour or with the day and at the very least once a week. So stay on your webbed toes. The aim is to share good hearty-to-eat poetry. This is a birdhouse size file from the larger Longhouse which has been publishing from backwoods Vermont since 1971 books, hundreds of foldout booklets, postcards, sheafs, CD, landscape art, street readings, web publication, and notes left for the milkman. Established by Bob & Susan Arnold for your pleasure.
The poems, essays, films & photographs on this site are copyrighted and may not be reproduced without the author's go-ahead.
Write Bob or the Bookshop