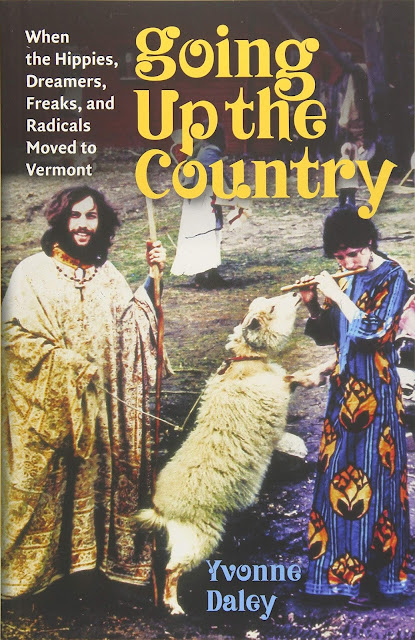 More an historical narrative and portrait-driven
wonder on the counterculture streamlined
back-to-the-land movement once upon a time in Vermont.
The tribes arrived when gasoline cost 20 cents (I remember)
a gallon, and land was cheap, and some of the
ragamuffins were filthy rich, others had strong backs,
a mighty handful persist to this day. Not quite
the seminal text on the subject as Robert Houriet's
Getting Back Together, written in real-time
and it felt it; Daley digs in deeply to the
Green Mountain state decades after its
zenith dream-time and finds many of
the key locations, people, and she
cherishes the heart that came with it.
A wiser proof reader should have been hired:
it has never been "Woodie" Guthrie (and
never will be), and "Further" was certainly
not cosmopolitan author Tom Wolfe's
prankster bus, but Oregon's own
Ken Kesey's.
Veteran commune photographer Peter Simon's
work graces the front cover of this
handsome book.
The resonant message: thousands came
and an uncountable stayed and made a viable community —
one outlier became mayor, congessman, then senator,
and almost the president.

Labels: 1960-present, Going Up the Country, University Press of New England, Vermont communes, Yvonne Daley
Newer Posts Older Posts Home
Subscribe to: Posts (Atom)
A poem (or more) will be offered by the hour or with the day and at the very least once a week. So stay on your webbed toes. The aim is to share good hearty-to-eat poetry. This is a birdhouse size file from the larger Longhouse which has been publishing from backwoods Vermont since 1971 books, hundreds of foldout booklets, postcards, sheafs, CD, landscape art, street readings, web publication, and notes left for the milkman. Established by Bob & Susan Arnold for your pleasure.
The poems, essays, films & photographs on this site are copyrighted and may not be reproduced without the author's go-ahead.
Write Bob or the Bookshop