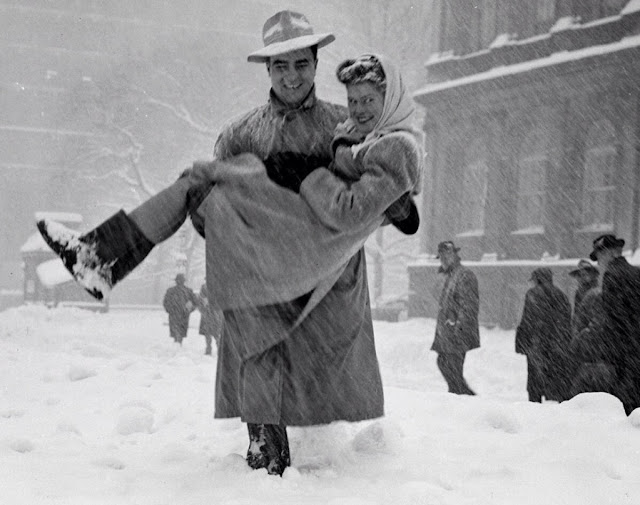 
We are recovering (the word) from a full-fledge blizzard on Tuesday. Not that it’s our first! It’s more that we already had a taste of Spring, the ground almost bare, open, free, even bird calls were changing, and now this. When I was 30 years old it was thrilling. At this age it seems cruel, except it is all the same, get out and work in it, get involved, and since there is no choice, we do our own plowing and shoveling and unburying (a word with snow), we get it done. It takes many days to fully recover the way we live after a blizzard that brings almost two feet of snow, most of it blowing sideways at you as you work. The blowing lasts a few days long after the snow is over, so the snow drifts take effect. Clean up again where you already cleaned up. Then there’s the ice under all the snow so the plow doesn’t manage well. Our yard was built as an increasing paradise all these decades by acoustic living people, no plow, no modern machinery but a push mower, so everywhere are these defined stonewalls I built, pathways, raised beds, ideal for the eye and the ground living Thoreauvian. But introduce a plow and a first winter using one and now the stonewalls are often in the way. Can’t push the snow away. Now we’re boxed in with too much snow and frown at the thought of another snow storm because now we are having to hand shovel five foot banks of snow where the snow plow had to stop (stonewalls) and we are shoveling those high snow banks back further. A fiasco in the making. Keep thinking it is March and April is around the corner.  How many blizzards have we seen in April? Many! Yesterday, second day of the blizzard, wind starting to die down, instead of snowshoeing off somewhere like I often do, I’m snowshoeing back and forth a long trek from house to faraway cottage so Sweetheart has an easy enough hiking trail to reach the cottage in the morning to retrieve book orders. We have a bookshop. Back and forth tramp down a snowshoe path. Tramp back and forth four times, five times, six. Keep in mind someone I love lugging back a satchel of books in the dim early morning. The path looks winding with curves and neatness. A lovely path. 15 degrees. I can’t think of anything cleaner: has to be done, simple, cut into snow,  rounding around tall trees, get to a door. Perfectly clear. A duty. The plow is a beautiful blue, new, hardy, but it’s now boxed in and wanting no more snow. Those spring bird calls have all but disappeared. Owls are back. I hiked under a barred owl the other day, before the snow, and it appeared as happy and freewheelin’ with the open ground as I was. He could catch mice. I could get a look at him. All gone in the big whiteness. The temperature is 20 degrees below normal. Plenty of firewood.

Labels: Bob Arnold (blizzard)
Newer Posts Older Posts Home
Subscribe to: Posts (Atom)
A poem (or more) will be offered by the hour or with the day and at the very least once a week. So stay on your webbed toes. The aim is to share good hearty-to-eat poetry. This is a birdhouse size file from the larger Longhouse which has been publishing from backwoods Vermont since 1971 books, hundreds of foldout booklets, postcards, sheafs, CD, landscape art, street readings, web publication, and notes left for the milkman. Established by Bob & Susan Arnold for your pleasure.
The poems, essays, films & photographs on this site are copyrighted and may not be reproduced without the author's go-ahead.
Write Bob or the Bookshop