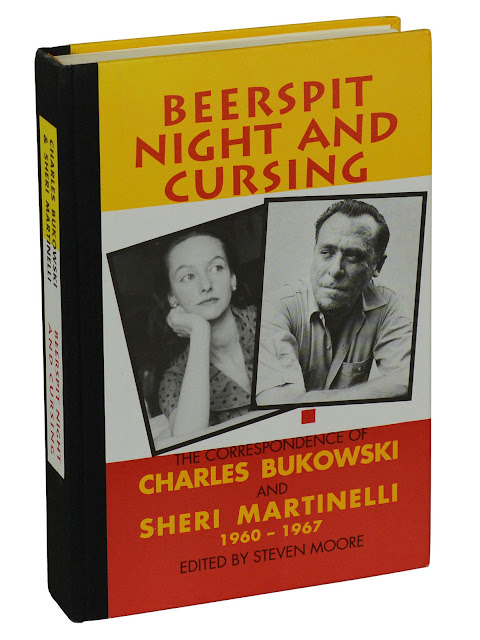 Shirley Burns Brennan (you can see and feel the Irish ancestry) kept the last name Martinelli from her brief marriage to the abstract painter Ezio Martinelli. Her life credentials are staggering for someone barely remembered: muse and mistress to Ezra Pound during his residency at St. Elizabeth’s Hospital just begins things. Martinelli is a key figure throughout Anais Nin’s Diaries, and William Gaddis drew his character Esme from Martinelli for his greatest work The Recognitions. She will begin a long correspondence with Charles Bukowski in 1960 which may be one of the best things that ever happened to him, since Martinelli is her own, dedicated and tough. She pushes H.D. at him; he pushes back with Jeffers love. They both meet nicely over Pound. For awhile I found Martinelli’s letters cryptic and taut with hipster talk, but she will grow on you, she’s good for you. Bukowski remains.

Labels: Charles Bukowski, poetry, Sheri Martinelli, Steven Moore
Newer Posts Older Posts Home
Subscribe to: Posts (Atom)
A poem (or more) will be offered by the hour or with the day and at the very least once a week. So stay on your webbed toes. The aim is to share good hearty-to-eat poetry. This is a birdhouse size file from the larger Longhouse which has been publishing from backwoods Vermont since 1971 books, hundreds of foldout booklets, postcards, sheafs, CD, landscape art, street readings, web publication, and notes left for the milkman. Established by Bob & Susan Arnold for your pleasure.
The poems, essays, films & photographs on this site are copyrighted and may not be reproduced without the author's go-ahead.
Write Bob or the Bookshop