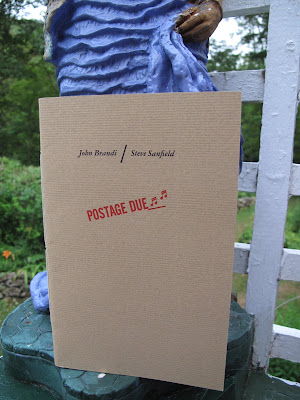 All day I've been writing away on the final leg of the Longhouse Bibliography for the years 2008-2012. I'm at 2011 and thought to charge ahead and get more under the belt and then I opened the mail ~ and here was a new book by John and Steve (sent by Steve, with other loose poems to share) and I couldn't help myself but to read. Everything.


Then go out and snap a photograph


Then type you up some of the poems from the book


So you are here with me

but the sky fills

every knot on the floor

another pal becomes a recluse

almost no one left

out the door yet

what they told him not to

a stone or two

soften his own fall

so happy for their visit

he opens the gate

for the swirling leaves