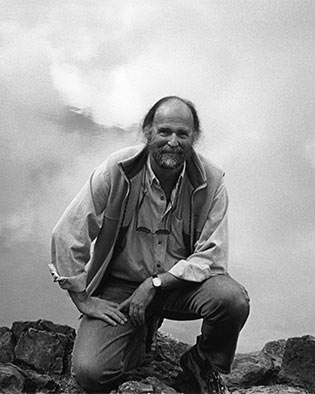 Evening in the Tetons,

and the broken walls are etched sharply

in a low angle of light

the canyon will sing

the same song to itself,

and wind will curl

about the ridges and towers

with nothing to promise,

with no song it hasn't sung

for an epoch or two

and nothing new in its pocket

but a handful of sand.

In the Burrow of Night

the stars step slowly across the valley

and frost circles the tent.

A great gray owl barks and

hoots up the pine woods,

Waking in the moonless dark,

I am, for a moment, a small

pocket gopher or hare — some

and burrow down into my bag

'against the chill,' I tell myself.

and nod only slightly

to the dew drenched morning,

where even the tough

Tim McNulty is a poet, essayist, conservation activist, and nature writer. He was born and grew up in Connecticut's Quinnipiac River Valley and attended Northeastern University and the University of Massachusetts at Boston. There he met poet Denise Levertov who inspired him with her powerful fusion of visionary poetics and political activism. Tim traveled throughout the West after college and settled on the Olympic Peninsula in 1972. He lives with his wife, Mary Morgan, in the foothills of the Olympic Mountains above the Dungeness and Graywolf rivers. A passionate spokesman for the wild, Tim remains active in the Northwest environmental community.

Labels: Tim McNulty
Newer Posts Older Posts Home
Subscribe to: Posts (Atom)
A poem (or more) will be offered by the hour or with the day and at the very least once a week. So stay on your webbed toes. The aim is to share good hearty-to-eat poetry. This is a birdhouse size file from the larger Longhouse which has been publishing from backwoods Vermont since 1971 books, hundreds of foldout booklets, postcards, sheafs, CD, landscape art, street readings, web publication, and notes left for the milkman. Established by Bob & Susan Arnold for your pleasure.
The poems, essays, films & photographs on this site are copyrighted and may not be reproduced without the author's go-ahead.
Write Bob or the Bookshop