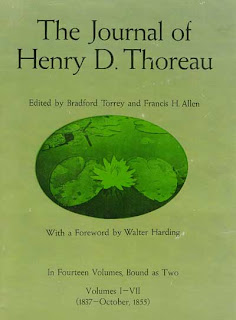 "These regular phenomena of the seasons get at last to be — they were at first, of course — simply and plainly phenomena or phases of my life. The seasons and all their changes are in me."
(Journal: Oct 25, 1857)

The Journal of Henry David Thoreau spans the years between 1837 and 1861 — a period of twenty- four years, comprising of forty-seven manuscript volumes, all two million words — published in its entirety in 1906. A new, expanded edition of the Journals is in the works,  published by Princeton University Press.  Here is a very brief chronology showing some of the Thoreau years: 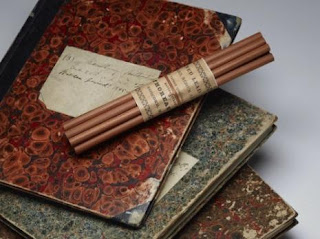 1838: Thoreau opened a private school
1838: delivered his first lecture at the Concord Lyceum
1838: traveled to the Maine Woods (and 1846, 1853, 1857)
1839: with his brother John, traveled the Concord and Merrimack Rivers
1840-1844: contributed his writings to the Dial
1842: witnessed and suffered himself the death, from lockjaw, of his brother John
1843: tutored William Emerson's children on New York's Staten Island
1844: accidentally set fire to the Concord Woods
1845:built his Walden cabin on Walden Pond and moved in on Independence Day
1847: moved away from his Walden Pond cabin
1848: lived at Ralph Waldo Emerson's home before returning to his family's home
1848: published "Ktaadn and the Maine Woods"
1849: paid for and published A Week on the Concord and Merrimack Rivers
1849: traveled to Cape Cod (and 1850, 1855)
1854: Walden published
1854: lectured on slavery
1856: worked as a surveyor and introduced to Walt Whitman
1858: traveled to the White Mountains of New Hampshire
1860: delivered "The Succession of Forest Trees" at the Middlesex Cattle Show
1861: left for Minnesota with Horace Mann, Jr., hoping a change of pace would bolster his failing health, but returned after less than two months to Concord, Massachusetts, where he lived in the family home, downstairs, receiving guests until he passed away of tuberculosis and bronchitis on May 6, 1862.
Last words in a full sentence: "Now comes good sailing."
(followed by two words "moose". "Indian.") 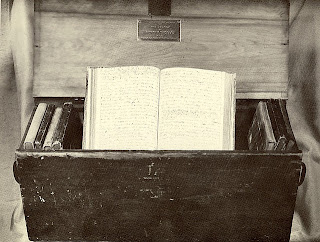 pine box built by Thoreau to house his journals

"How to live — How to get the most life! as if you were to teach the young hunter how to entrap his game. How to extract its honey from the flower of the world. That is my every day business. I am as busy as a bee about it. I ramble over all fields on that errand and am never so happy as when I feel myself heavy with honey and wax. I am like a bee searching the live long day for the sweets of nature. Do I not impregnate and intermix the flowers produce rare and finer varieties by transferring my eyes from one to another? I do as naturally and as joyfully with my own humming music — seek honey all the day. With what honied thought any experience yields me. I take a bee line to my cell. It is with flowers I would deal. Where is the flower there is the honey — which is perchance the nectareous portion of the fruit — there is to be the fruit — and no doubt flowers are thus colored and painted — to attract and guide the bee. So by the dawning of radiance of beauty are we advertised where is the honey and the fruit of thought of discourse and of action — We are first attracted by the beauty of the flower, before we discover the honey which is a foretaste of the future fruit. Did not the young Achilles(?) spend his youth learning how to hunt? The art of spending a day. If it is possible that we may be addressed — it behooves us to be attentive. If by watching all day and all night — I may detect some trace of the Ineffable — then will it not be worth the while to watch? Watch and pray without ceasing. . .I am convinced that men are not well employed — that this is not the way to spend a day."
HDT  (1851) 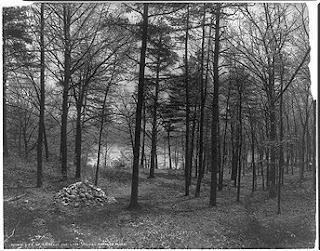