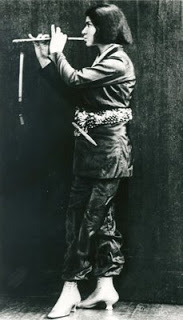 My edition of Concert (Konzert in German)

has for its front cover, naturally, one of Franz Marc's

wondrous postcard paintings which the artist sent to

Lasker-Schuler almost monthly over the years 1912-14.

Marc would perish in WW I at Verdun as a soldier in 1916,

one year after another of the author's associates,

the poet Georg Trakl, took his life after the horrendous

whether the death of her beloved mother and brother Paul, and even her

only child, also Paul, from an ill-fated marriage, and still in

Concert we receive a dulcet style of stories, essays, dream-state

vignettes. It was one of the last books published by a Jew before

the rise of the Third Reich. Lasker-Schuler was out of Germany before

elderly and unevenly in Palestine, struggling with the language and never

quite coming to terms with where she was and the Palestine of her dreams.

poetess Germany ever had."

Poetry sails through her prose. 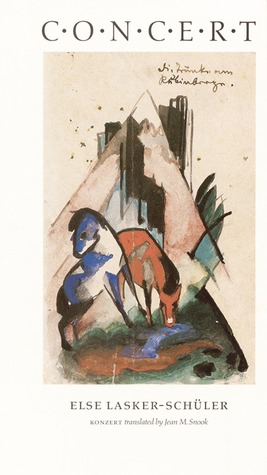 Labels: Else Lasker-Schuler, German Literature, Jean M. Snook
Newer Posts Older Posts Home
Subscribe to: Posts (Atom)
A poem (or more) will be offered by the hour or with the day and at the very least once a week. So stay on your webbed toes. The aim is to share good hearty-to-eat poetry. This is a birdhouse size file from the larger Longhouse which has been publishing from backwoods Vermont since 1971 books, hundreds of foldout booklets, postcards, sheafs, CD, landscape art, street readings, web publication, and notes left for the milkman. Established by Bob & Susan Arnold for your pleasure.
The poems, essays, films & photographs on this site are copyrighted and may not be reproduced without the author's go-ahead.
Write Bob or the Bookshop