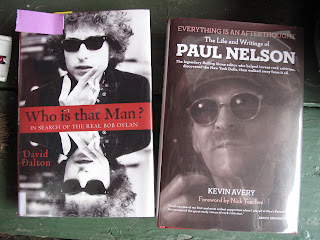 Once upon a time two Minnesota folkies and friends, and for my money, the two best books on the subject of either artist.

If I say more, it will be hyperbole. Go read and enjoy.

I read one by the ocean over two days, the other while traveling the high road and the low to rural places. Each one was an exquisite companion.

If any remember Paul Nelson from the 60s (The Little Sandy Review) thru 90s — essays in Rolling Stone — on The New York Dolls, Neil Young, Warren Zevon, and of course Dylan, this is your chance to grab most of those essays under one roof. Nelson also wrote well on Clint Eastwood and Ross Macdonald, two California boys.

Who Is That Man?
in search of the real Bob Dylan
by David Dalton
(Hyperion 2012)